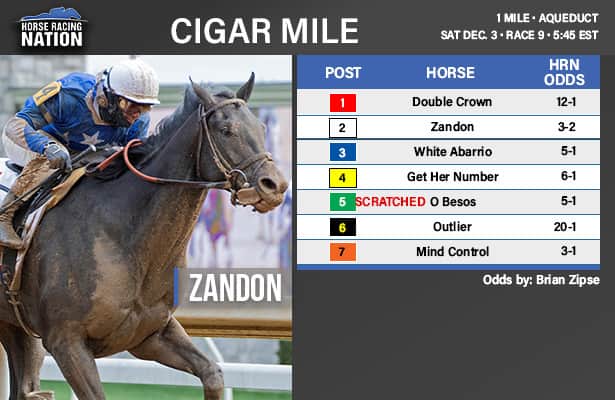 A field of seven was drawn for Saturday’s $750,000 Cigar Mile Handicap at Aqueduct in New York's final Grade 1 of the year. Three-year-old Zandon is expected to be the favorite in his first start against older horses.

Get expert picks for Aqueduct

Twelve 3-year-olds have won this race since its inception as the NYRA Mile in 1988, including Woody Stephen’s Forty Niner in the first running and Americanrevolution last year for Todd Pletcher.

Here is a full-field analysis for the Cigar Mile with morning-line odds provided by the Horse Racing Nation staff. The race is scheduled as race 9 of 10 on a card that has four graded stakes.

1. Double Crown (12-1 – Bourbon Courage – Lynn Cash / J. D. Acosta – 24: 6-8-1 - $548,265) Double Crown registered his first graded-stakes victory in the Kelso Handicap (G2) when he rallied from behind to beat Baby Yoda in his first and only start at Aqueduct. He was claimed for $40,000 in June at Churchill Downs and since then raced at six different tracks for Cash. Double Crown once again will ship to New York from his base at Laurel Park. Live long shot.

2. Zandon (3-2 – Upstart – Chad Brown / Joel Rosario – 8: 2-3-3 - $1,144,000) A debut winner last year in October, in his next seven starts Zandon faced only Grade 1 and 2 competition, all the while finishing in the top three. He ran in three Kentucky Derby preps, winning the Blue Grass (G1), and then was third in the Run for the Roses. During his 3-year-old campaign Zandon faced the top 3-year-olds – Epicenter, Taiba, Cyberknife, Mo Donegal and Rich Strike. He now will cut back to a mile at Aqueduct, where last December he was second in the Remsen (G2). Chad Brown will try to win the Cigar Mile for the third time. He won it in 2016 with the 3-year-old Connect. The one to beat.

3. White Abarrio (5-1 – Race Day – Saffie Joseph Jr. / Irad Ortiz Jr. – 9: 4-1-1 - $972,550) White Abarrio once again will return from a layoff for trainer Saffie Joseph Jr. Since his big wins on the Kentucky Derby trail at Gulfstream Park, when he became a Grade 1 winner in the Florida Derby, the best that he has done was a second in the Ohio Derby (G3) in June. In the Haskell (G1), White Abarrio did no running at all and then after two months off he set the pace in the Pennsylvania Derby (G1) but faded to fifth. Now another two months has passed, and he will face older horses for the first time in his career as he seeks his first victory away from Gulfstream. Joseph put three fast workouts into his horse to prepare for the one-turn mile. Use underneath.

4. Get Her Number (6-1 – Dialed In – Peter Miller / Luis Saez – 14: 5-1-1 - $550,661) This 4-year-old was a Grade 1 winner in his third start when he was victorious in the American Pharoah in 2020 over Rombauer. The following year he made two starts on the Kentucky Derby trail, with a seventh in the Rebel (G2) and a fourth in the Arkansas Derby (G1). In 2022, Get Her Number registered three allowance wins – one on the turf at Santa Anita, then in a dirt sprint at Churchill and in his most recent start he rallied going six furlongs at Del Mar. Four starts in graded stakes this year produced a third in the Triple Bend (G2) and a second in the Bing Crosby (G1). The Cigar Mile will be his first start in New York. Toss.

We are most familiar with O Besos from his 3-year-old campaign last year, when he was on the Kentucky Derby trail at Fair Grounds and then finished fifth in the Run for the Roses behind Medina Spirit, Mandaloun and Hot Rod Charlie. When Medina Spirit was disqualified, he was awarded fourth place. This year the son of Orb made five starts, including a fifth in the Breeders’ Cup Sprint (G1), which came after an allowance win at Churchill Downs with a closing move. Win contender.

7. Mind Control (3-1 – Stay Thirsty – Todd Pletcher / John Velazquez – 28: 11-3-6 - $1,773,334) The 6-year-old $1 million earner returns to Aqueduct, where he won four stakes with three of them graded. In his career, Mind Control won 4 of 5 starts at the one-mile distance. This year he was victorious in the Salvator Mile (G3) at Monmouth Park over Hot Rod Charlie and most recently was awarded first in the Parx Dirt Mile in September through disqualification. Trainer Todd Pletcher has won the Cigar Mile five times. Top choice.

Summary: The introduction to this odds and analysis and the individual horse write-ups focused on the match-up between 3-year-olds and older horses. With the Cigar Mile running in December, it is in an ideal spot on the calendar for the interdivisional battle to occur. Zandon and White Abarrio lead the way for the 3-year-olds, and Mind Control and O Besos, before he was scratched, top the older male division.

Zandon deserves to be the favorite based on his six-race campaign, which is highlighted by top three finishes in big stakes such as the Kentucky Derby and a Grade 1 victory in the Blue Grass. Zandon now cuts back in distance to a one-turn race for the first time since he broke his maiden at Belmont Park in his debut as a juvenile.

The 6-year-old Mind Control has a great record at Aqueduct and throughout his career faced the best sprinters in the country. Todd Pletcher has been able to keep the son of 2012 Cigar Mile winner Stay Thirsty competitive.

Looking at the possibility of 3-1 odds on Mind Control, he will be the top choice. Throughout his career, Mind Control relished battles down the stretch and frequently came out on top. On the other hand, the favorite Zandon has not won a race since April while also facing the top competition in his division.