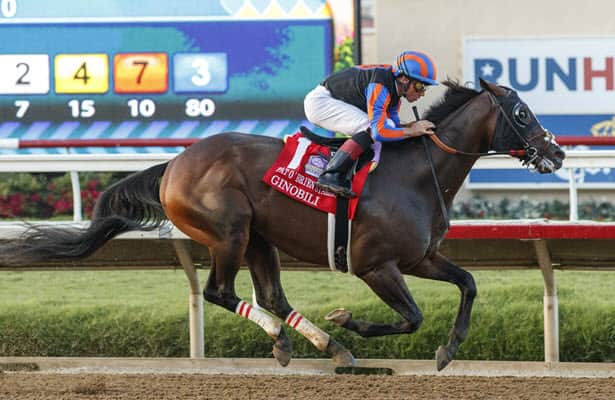 The New York Racing Association has a pair of one-turn one-mile Grade 1 races that test the best sprinters in the country. In June, it is the Met Mile at Belmont Park and on Saturday the $750,000 Cigar Mile will be the feature at Aqueduct. The one-turn mile brings together longer-distance sprinters and horses moving from two-turn races to the one-turn format.

Hall of Famer Bill Mott will try to win this race for the fourth time with Olympiad. Mott’s first victory was with Cigar in 1994, when the race was known as the NYRA Mile. For the great Cigar, it was the second win in his 16-race streak, which included first-place finishes in 10 Grade 1s.

Trainer Todd Pletcher has Following Sea and American Revolution in the field as he tries for his fifth victory in the Cigar Mile.

The Cigar Mile, which is the final Grade 1 race of the year at NYRA, is carded as race 10 out of 10 with post-time set for 4:13 p.m. ET. Here is a full-field analysis with odds provided by the Horse Racing Nation staff.

1. Following Sea (6-1 – Runhappy – Todd Pletcher / John Velazquez – 7: 3-1-3 - $693,020) Following Sea ran third in the Breeders’ Cup Sprint after he had to steady coming down the stretch when a hole closed. Rider John Velazquez insists that without the trouble, Following Sea was going to win that race. This son of Runhappy will stretch back out in distance from sprinting, but the one-turn format should mitigate any distance concerns. He won the Vosburgh (G2) on the front end and was third behind Jackie’s Warrior and Life is Good in the Jerkens (G1). The Cigar Mile seems like a softer spot than the Breeders’ Cup and the Jerkens. Top choice.

2. Plainsman (15-1 – Flatter – Brad Cox / Manny Franco – 26: 8-6-4 - $753,207) This 6-year-old is still running well and brings a 2-for-2 record at Aqueduct into the race. Most recently he was third in the Bold Ruler (G3) on a sloppy track as the favorite and before that rallied to win the Ack Ack (G3) at Churchill Downs. Overall, Plainsman is the winner of 4 of his last 6 starts at six tracks at distances from seven to nine furlongs. Use underneath.

3.  Americanrevolution (4-1 – Constitution – Todd Pletcher / Luis Saez – 6: 4-0-1 - $532,035) This 3-year-old won all four of his races against New York-breds, including three stakes by a combined 24 lengths. In the midst of those victories, Americanrevolution was third in the Pennsylvania Derby (G1) behind Hot Rod Charlie and Midnight Bourbon. The recent 11 3/4-length win in the Empire Classic was going a one-turn nine furlong against older horses. The son of Constitution prefers to run close to the pace and has shown his versatility while sprinting and going two turns. Win contender.

4. Code of Honor (4-1 – Noble Mission – Shug McGaughey / Tyler Gaffalione – 19: 7-5-2 - $2,951,320) This 5-year-old is by far the leading money winner in the field. In what is likely to be the final start of his career, Code of Honor will make his first appearance at Aqueduct. As a 3-year-old, he had that great streak of victories in the Dwyer (G3), Travers (G1), and the Jockey Club Gold Cup (G1) which followed his second in the Kentucky Derby. Since then, there have been a pair of Grade 3 wins, with the most recent coming in the Iselin at Monmouth Park this summer. He was second in the Fayette (G2) behind Independence Hall and has not won a race without Lasix in three tries. It is possible that Code of Honor is showing his age a bit. Use underneath.

5. Independence Hall (5-2 – Constitution – Michael McCarthy / Javier Castellano – 13: 5-2-2 - $874,000) Independence Hall has a 2-for-2 record at Aqueduct running the one-turn mile. Those wins happened at the beginning of his career in the Nashua (G3) by 12 lengths and the Jerome for his original trainer Michael Trombetta. He has calmed down and matured since those days when he terrorized the paddock at the Big A. The now 4-year-old was last seen romping to a front-end victory in the Fayette (G2) at Keeneland. His is one who will cut back from two-turn racing but does so with that perfect record in the one-turn mile. Win contender.

6. Ginobili (7-2 – Munnings – Richard Baltas / Drayden Van Dyke – 14: 3-2-1 - $449,825) Since adding blinkers at Del Mar this summer, Ginobili is in the finest form of his career. He romped in an allowance and then won the seven-furlong Pat O’Brien (G2). Most recently he was second behind Life is Good in the Breeders’ Cup Dirt Mile. He will ship east for the first time in his career. Horses from New York have run well at Del Mar in the Breeders’ Cup, so maybe his Del Mar form will carry over to Aqueduct. Win contender.

7. Olympiad (12-1 – Speightstown – Bill Mott / Joel Rosario – 4: 2-1-1 - $120,440) This lightly raced 3-year-old hit the board in all four of his starts, including a gate-to-wire victory in a seven-furlong allowance at Keeneland as the odds-on favorite. This son of Speightstown broke his maiden at Saratoga this summer as the favorite. He will make his stakes debut in this Grade 1, and that is a big ask for any horse. Toss.

8. Pipeline (15-1 – Speightstown – Chad Brown / Jose Ortiz – 5: 1-1-1 - $97,200) It took this Chad Brown runner four tries to break his maiden, which he did at Saratoga going seven furlongs. He came back in October in the Perryville at Keeneland, where he had the lead in the stretch and then finished third beaten by a neck by the winner. Toss.

Summary: Code of Honor is the leading money winner in the 2021 Cigar Mile field by more than $1 million and the only Grade 1 winner. It was expected that the Fayette was going to be his last start, but trainer Shug McGaughey brings him back for one more race after finishing second in that Grade 2 at Keeneland. The 5-year-old’s best days might be gone, so I will look to others to win their first Grade 1.

Although he had only one win since settling in as a sprinter, Following Sea ran well against strong fields in all three of those starts in the Breeders’ Cup Sprint, the Vosburgh, and the Jerkens. He has enough speed to get good position from the rail post. Following Sea seems perfectly suited to the one-turn mile which he will try for the first time.

Americanrevolution, Independence Hall and Ginobili are the top contenders for the win spot, with Plainsman as an interesting horse to get in the trifecta at generous odds.