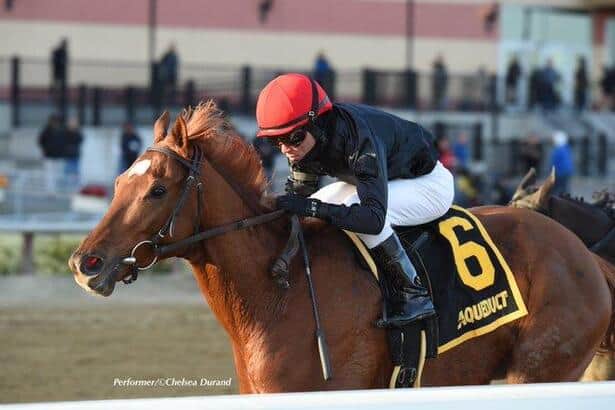 Saturday's Cigar Mile Handicap is the last Grade 1 of the year in New York, and there is a good chance that it will be run on a wet track. This race is named after the late, great Cigar. He won this event in 1994 when it was known as the NYRA Mile. He captured sixteen consecutive races from fall 1994 through the Arlington Citation Challenge Invitational in July 1996.

Eleven of those wins were in the Grade1 ranks. His spectacular win streak came to an end when finishing 2nd to Dare and Go in the 1996 Pacific Classic at Del Mar.

In the 2020 renewal of the Cigar Mile, Performer is the morning line favorite . His five-race win streak is not quite Cigar-like, but it dates back to June 2019. He has had problems staying healthy, but hopefully his physical issues are finally behind him. Firenze Fire, who has been a quality sprinter for quite some time, is the second choice on the morning line.

Sophomore King Guillermo has not been seen since the Arkansas Derby on the first Saturday in May, and New York-bred Mr. Buff is probably the one to catch. Before deciding how to bet Saturday’s 10th race at Aqueduct, let’s meet the entire field.

#1 Performer (7-5) won all five starts since beginning his career with a show finish in 2018. He is sharp and versatile and won the Discovery (G3) at Aqueduct last year. Shug McGaughey’s talented colt prepped for this race with a good looking flat mile optional claiming win in the mud at Belmont Park on Oct. 17. Joel Rosario guided him home in each of his victories and is back aboard in this spot.

#6 King Guillermo (9-2) is a lightly-raced sophomore making his first start in more than seven months. I like his tactical speed and this is probably a good distance for him. This is his first start vs. older rivals and obviously his toughest test to date.

#3 Snapper Sinclair (20-1) hit the board in his last two turf starts and has placed in four stakes races overall this year. A minor award is a definite possibility.

#8 True Timber (15-1) has not won in quite some time but occasionally jumps up and hits the board in graded races. He landed the show in this race last year and was the runner-up in the 2018 edition. He exits a runner-up finish in the Lafayette Stakes at Keeneland.

#2 Mind Control (20-1) captured four of five starts at Aqueduct with a runner-up finish. His recent form is suspect, but the multiple graded winner is capable of competing with these on his best day. There is a good chance of rain and he has struggled on a wet track this year.

#4 Firenze Fire (5-2) exits an okay show finish in a less than stellar renewal of the Breeders’ Cup Sprint (G1). The classy 5-year-old horse does his best work at Belmont Park and was nowhere in a pair of wet track attempts in 2020.

#5 Mr. Buff (6-1) is a talented New York-bred with dangerous early speed. He has not had any luck in the graded ranks and is probably in too deep.

#7 Majestic Dunhill (20-1) is an extended sprint specialist wheeling back quickly. He showed improved early interest in back-to-back fall starts at Belmont Park including a victory in the Bold Ruler (G3) on Oct. 31. He acted up in the gate and was no threat in the Fall Highweight (G3) on this past Sunday.

#9 Bon Raison (20-1) was no factor in the Breeders’ Cup Sprint (G1) last time and is frequently overmatched in the graded ranks.