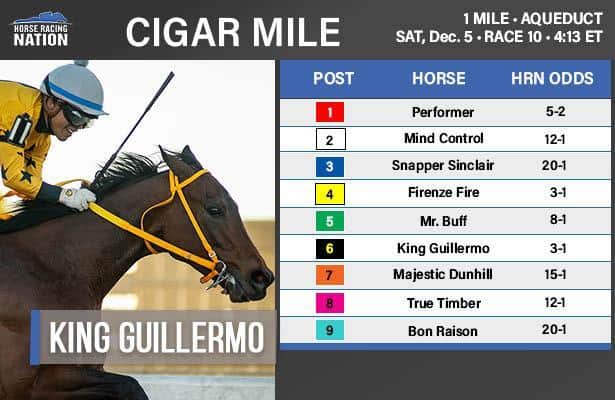 The $250,000 Cigar Mile, which is the final Grade 1 race of the year in New York, headlines a weekend of racing at Aqueduct that includes seven stakes races and offers purses of $1.25 million.

The field of nine includes five millionaires and two Grade 1 winners — and eight of the contenders have a stakes victory in their careers.

Last year, Maximum Security’s victory helped secure the 3-year-Old Championship, and since 2000, seven 3-year-olds won the Cigar Mile. This year, King Guillermo will make his first start against older horses in the one-turn mile after a layoff since May.

Here is a full field analysis for Saturday’s Cigar Mile with morning-line odds from Horse Racing Nation. Post time for race 10 is scheduled for 4:13 pm ET.

1) Performer [ML 5-2 – Speightstown – C. McGaughey/J. Rosario – 6: 5-0-1 - $295,500] Performer brings a five-race winning streak into his first try in a Grade 1. He ended his 3-year-old campaign in 2019 with pace pressing victory in the Discovery (G3) at Aqueduct. After that he was away from the races for 11 months and made a winning return in an Oct. 17 allowance at Belmont Park going a mile on a muddy track. The son of Speightstown tasted defeat only once, and that was in his debut as a 2-year-old. He is the horse to beat even with his limited number of starts. Top choice

2) Mind Control [ML 12-1 – Stay Thirsty – G. Sacco/J. Velazquez – 15: 7-2-3 - $1,047,429] Mind Control returns to Aqueduct, where he has four wins and a second from five starts, including three Grade 3 stakes. He was a Grade 1 winner as a 2-year-old and a 3-year-old, but this year he is winless since his first two starts of the year in the winter at the Big A. He has a win and a second in two starts at the mile distance. The son of Stay Thirsty will have to rebound from his last three starts, which were uncharacteristically uncompetitive. Use underneath

3) Snapper Sinclair [ML 20-1 – City Zip – S. Asmussen/M. Franco – 29: 5-6-4 - $1,388,260] Steve Asmussen ships Snapper Sinclair to New York from Kentucky to make his first start at the Big A. The son of City Zip has not won a race since August 2019, when he took the Tourist Mile at Kentucky Downs. From his five career victories, two were on the turf and three were going the mile distance. His last three starts were on the grass, where he was third in an allowance and was second while trying to defend his Tourist Mile win at Kentucky Downs. Toss

4) Firenze Fire [ML 3-1 – Poseidon’s Warrior – K. Breen/J. Lezcano – 30: 12-3-3 - $2,218,250] Since joining the barn of Kelly Breen, Firenze Fire won the True North (G2) and the Vosburgh (G2) going six furlongs at Belmont and had his best finish in the Breeders’ Cup Sprint when he finished third just a neck out of the place position. The winner of 12 out of 30 starts and more than $2.2 million got two of those wins at the Big A. Although Firenze Fire raced more often at six and seven furlongs, he won the Dwyer (G2) and the Champagne (G1) going the one-turn mile. Though some might say that the mile distance is not his best, you take a big risk dismissing the 5-year-old on this track in his current form. Win contender

5) Mr. Buff [ML 8-1 – Friend or Foe – J. Kimmel/J. Alvarado – 40: 15-7-4 - $1,210,786] There are two Mr. Buffs on the racetrack — the one who dominates the New York-bred stakes races for older dirt horses and the other who can’t seem to hit the board in graded stakes races. In his most recent start, he was a front-end winner of the Empire Classic at Belmont, but in the Whitney (G1) he faded to a distant fifth-place finish. The 6-year-old millionaire has a splendid record with 15 wins in 40 starts, but it seems unlikely that the Cigar Mile is where he will break through at the Grade 1 level. Toss

6) King Guillermo [ML 3-1 – Uncle Mo – J. C. Avila/J. Ortiz – 5: 2-1-1 - $340,350] The Arkansas Derby (G1) was the last time that King Guillermo was seen on the track. He went to Oaklawn Park after a 49-1 victory in the Tampa Bay Derby (G2) and finished second behind Nadal. He will return after seven months off and face older horses for the first time while never having raced at a New York track. Trainer Juan Carlos Avila has put a couple of very fast workouts into the son of Uncle Mo while training at Gulfstream Park. Jose Ortiz gets the mount for the first time on this pace presser. Can he fire his best shot under these conditions? Win contender

7) Majestic Dunhill [ML 15-1 – Majesticperfection – G. Weaver/D. Davis – 22: 5-4-4 - $374,714] This 5-year-old gelding got his first graded stakes victory when he won the Bold Ruler (G3) against a field of four going seven furlongs on a muddy Belmont Park track on the last day of October. Trainer George Weaver brought him back in the Fall Highweight Handicap (G3) at Aqueduct, where he was seventh and last after being a bit fractious in the starting gate. Now, he comes back on six days rest to try the mile distance for the first time. In three previous tries in Grade 1 stakes, he finished toward the back of the field. Toss

8) True Timber [ML 12-1 – Mineshaft – J. Sisterson/K. Carmouche – 28: 4-5-9 - $1,077,650] True Timber travels across the country while racing in graded stakes for Calumet Farm and now, as a 6-year-old, is a millionaire with four victories from 28 starts. Two of those wins came Aqueduct, where he was third in last year’s Cigar Mile. You have to go back to September 2018 to find his most recent win in an allowance at Belmont. The bottom line is that he has yet to win a stakes race but is hard to dismiss from the trifecta. Use underneath

9) Bon Raison [ML 20-1 – Raison d’Etat – J.Sisterson/J. Vargas Jr. – 44: 11-4-7 - $674,534] This 5-year-old was claimed for $80,000 from an optional claiming allowance at Saratoga by Calumet Farm and trainer Jack Sisterson. Since then, he won a six-furlong allowance at Keeneland and then ran 10th in the Breeders’ Cup Sprint. Three of his 11 career victories were at Aqueduct and include a listed stakes race. Typically, he employs a closing style, and here he faces a major class challenge in this Grade 1 race. Toss

Summary: Performer, Firenze Fire and King Guillermo have a clear class advantage over the rest of this field.

Performer and Firenze Fire are both in fine form right now and have graded stakes wins at Aqueduct. Firenze Fire is the gritty veteran, with 12 victories in his career, and Performer might still be getting better.

King Guillermo is the big question mark in the Cigar Mile as he returns from a long layoff. Prevailing handicapping wisdom says don’t bet on a horse that is trying to do things for the first time, such as run against older horses and race on the deep and tiring Aqueduct main track. Still, running behind Nadal in the Arkansas Derby after winning the Tampa Bay Derby says that this son of Uncle Mo has talent and shouldn’t be ignored.