Churchill's Stephen Foster a fit after all for By My Standards 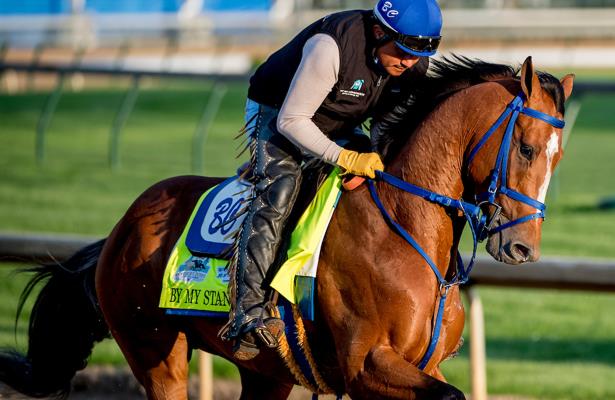 Social distancing could only last so long when Chester Thomas’ By My Standards won Saturday’s Oaklawn Handicap (G2) by 1 3/4 lengths over Warrior’s Charge.

Thomas, the Madisonville, Ky., entrepreneur who races in the named of Allied Racing, and wife Jennifer had one of their sons and daughter in law and another couple over to their home to watch the race.

“Unfortunately, with the coronavirus we couldn’t be there” at Oaklawn Park in Hot Springs, Ark., Thomas said. “The six of us stayed socially-distanced the best we could until the horse won. Then it was high fives and hugs.”

By My Standards, trained by Bret Calhoun, is 3-for-3 this year after his nine-month layoff following an 11th-place finish in the 2019 Kentucky Derby. His 1 3/4-length victory under Gabriel Saez in the Oaklawn Handicap moved the 4-year-old from eighth to third in this week’s NTRA Top Thoroughbred Poll, with the colt receiving a trio of No. 1 votes.

“Couldn’t be happier, couldn’t be prouder. Couldn’t be more relieved,” Thomas said. “A lot of horses exit the Kentucky Derby and never win another race in their career. By My Standards had a quarter crack, was all banged-up from being in the race. Give Bret Calhoun credit. He knew the horse was just a tick off. We did a full body scan on him, identified a couple of things that lit up, nothing major, and determined he just needed some good time off.

"We think our horse deserves and fits very well in the top echelon of racehorses. He’s starting to show he’s what we thought he’d be last year. We gave him plenty of time and gave him an opportunity to be all that he can be.”

Calhoun said he had a lot of confidence going into the deep and quality field, but that By My Standards’ No. 12 post in the Oaklawn Handicap was a concern.

"He’d never shipped to run and had never been over that surface,” Calhoun said. “Only thing I discussed with Gabe was that I thought the break was going to be the crucial factor. I said, ‘I think if we get away from the gate sharp, we’ve got a chance.’ Lo and behold, he did a great job getting away extremely sharp and, even better, got into a great position on the first turn -- honestly a lot better position that I thought we could be in.

“Then I was all worried because he was second off pretty significant fractions. You’re worried maybe it’s going to take too much out of him because he’s not (normally showing) that much early speed. But you could tell early on that he’d gotten pretty comfortable. I felt he would finish strong, which he did.”

The Kentucky Derby remains By My Standards’ only defeat since winning a Fair Grounds maiden race on his fourth attempt, which was followed by victory in last year’s Louisiana Derby (G2) at 22-1 odds to give Thomas his first graded stakes win. The son of the Spendthrift Farm stallion Goldencents resumed racing this year with a six-length allowance victory at the Fair Grounds, followed by a three-length score in the New Orleans Classic (G2).

“I really thought we were a live horse going into the Kentucky Derby,” Calhoun said. “We were battling a foot, but I think the biggest factor in the Kentucky Derby was the track getting very muddy. He broke a little tardy, lost his position on a speed-biased track with an extreme amount of kickback. It was pretty much race over at the break.

“But going into that race, I thought he was this kind of horse. We gave him all the time off he needed and pointed toward his 4-year-old season — which we always thought would be a better year for him, based on Goldencents winning the Breeders’ Cup Mile two years in a row and seemed to get better with age. This horse was a good-sized horse, but still a bit immature (physically). This year he’s filled out, a lot stronger horse, a lot more muscle. I think that’s why he’s sharper from the gate.”

Thomas, a two-time leading owner at Ellis Park, praises Oaklawn Park and track owner Louis Cella for continuing high-caliber racing without spectators after the sport shut down in most of the country amid the coronavirus pandemic, including Kentucky. Oaklawn split the Arkansas Derby into two divisions that ultimately ran with nine horses each, with the Oaklawn Handicap attracting a full field of 14 entrants (with one scratched).

“In my opinion, the Cellas deserve an Eclipse Award the way they’ve supported thoroughbred horse racing,” Thomas said of the sport’s highest honor. “Hats off to the Cellas. Unbelievable what they pulled off. They carried the water.”

By My Standards will ship to Churchill Downs next week. Though it’s tempting to pursue a Grade 1 victory in By My Standards’ next start, Thomas and Calhoun said staying home for Churchill's Stephen Foster (G2) on June 27 makes sense distance and time-wise.

“We’d like to try to win a Grade 1 race and that race was downgraded to a Grade 2 last year,” Calhoun said. “But I think it makes sense to stay home, run out of his own stall. I’m in a great spot right now. The horse is fresh, in great form, the timing with the races in the near future look like they’re going to work out for us. Then having the Breeders’ Cup in Kentucky in our own backyard, all that’s very positive for us.”

Thomas also campaigns the 4-year-old Mr. Money, winner of four graded stakes last year and who started his 2-year-old career racing at Ellis Park. Mr. Money, who could run in Churchill Downs’ new $100,000 Blame Stakes May 23 at a one-turn mile, finished sixth over a wet track in the Oaklawn Mile in his first 2020 start. “We just don’t think he liked that track at all,” Thomas said.

Allied Racing ranks No. 7 among North American owners for 2020 purse earnings at just under $1 million, while Calhoun ranks No. 9 among trainers at more than $1.9 million.

“We’re still riding the wave,” Thomas said. “It’s been a fun ride, but we know it won’t last forever. Jennifer and I are having the time of our lives. The only thing better would be if we could be at the track.”

By My Standards Stephen Foster

» Horse: By My Standards