Churchill calls an early ‘riders up’ for Derby jockeys 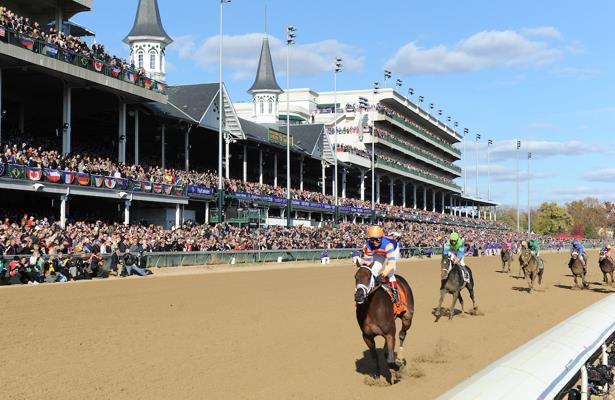 Jockeys who are based out of state at tracks such as Saratoga and Del Mar will be faced with a tough choice if they want to take part in the Kentucky Derby or Kentucky Oaks.

Churchill Downs confirmed Monday what had been expected by jockeys and their agents around the country: Riders must be in the state no later than Aug. 24, a full 12 days before the Derby, so that they may be tested more than once for the coronavirus.

“That would allow a minimum two sets of tests before they get into the jocks room,” Churchill Downs Racetrack President Kevin Flanery said on a conference call with horsemen Monday afternoon. “We are looking at that particular component and some additional opportunities for testing the jocks and the valets to be sure that we are keeping them as safe as possible and that we don’t create an environment where there’s a quick spread of the virus in the jocks' room.”

Flanery said that the early-arrival requirement mirrors restrictions on the comings and goings of jockeys at Saratoga. Without getting specific, he also referenced last month’s surge of coronavirus positives in Southern California as a reason for the tightening of the rules.

There already has been pushback from the jockeys.

“I’m sure I’ll make it,” two-time Derby winner and Honor A. P.’s rider Mike Smith said in a text message Monday. “Just hoping they come up with a better plan. Would be better for everyone if we could just come in, test and ride. Think there’s a better chance of getting it having to stay there 10 days.”

Trainer Bob Baffert, who was on Monday’s call, had the same opinion as Smith. He said the early-arrival mandate flies in the face of Flanery’s stated desire for added safety.

“Wouldn’t you think it would be better to have these jockeys come in as late as possible?” Baffert asked Flanery. “The longer you have them there, there’s the chance of them getting it during the week. I would feel you want jockeys to be less exposed to anything. I would let them come into the last minute, especially if they have (passed) a test.”

“Part of things we’re grappling with is they are coming from jurisdictions where a recommended 14-day quarantine is in place,” Flanery said in response. “We’re trying to balance that with the (Kentucky authorities) who allow us to move forward, trying to take their counsel and incorporate that into what we’re doing. I’m going to be very realistic. We’re trying to figure out what the safest way to do it is, and there will be disagreements and differing opinions with regard to that.”

Flanery did allow for the possibility of changes in the new “jockey protocols” that were drawn up July 31, but he also indicated that they could be stricter with the requirement of additional tests. The rules as written require all riders competing during Derby week in September to take one test by 6 p.m. ET on Monday, Aug. 24, and a second before noon on Monday, Aug. 31. Anyone who tests positive would be required to self-quarantine for 10 days in order to be available for the Kentucky Oaks on Sept. 4 or the Derby on Sept. 5.

Anyone who has access to the jockeys' rooms also will be required to pass a test by Aug. 31. Churchill Downs is adding an auxiliary room to expand social distancing among the riders. The rooms will be off-limits to jockeys’ families and the media. Jockeys agents also have been told that they will not be allowed in the stable area during a “lockdown” time until after the running of the Derby on Sept. 5.

Flanery also said that only two owners per horse will be allowed in the stable area during Derby week.

“By the end of the (spring) meet, we had two paddock passes for owners,” he said. “That will continue to be our protocol as we move forward. Around the 19th or 20th of August, we will lock the back side down. The only owners who will be allowed back there are two owners for Derby or Oaks horses. That’s our current thinking.”

Baffert called that “overkill” and said it was going to “take the fun completely out of the whole experience. You might as well have run in May. These owners, especially the horses running on Derby Day, they need to be able to come back there. And we’re all safe here in California. None of my owners got sick. We’re safe. We’re under control. We figured it out. If you say only two people can go back there, I think it’s going to be a big turnoff.”

“The Derby experience that you’re talking about is incredibly important,” Flanery told Baffert. “But we’ve got to have safety first.”

Jockey Flavien Prat, who landed last year’s Derby victory when Country House was promoted over the disqualified Maximum Security, said he has not decided whether he will leave Del Mar to take a ride this year at Louisville, perhaps on Authentic.

“They give the opportunity to every rider to ride on Derby weekend,” he said in a text message. “This is going to be a personal choice between not riding Derby weekend or giving up a lot of racing days.”