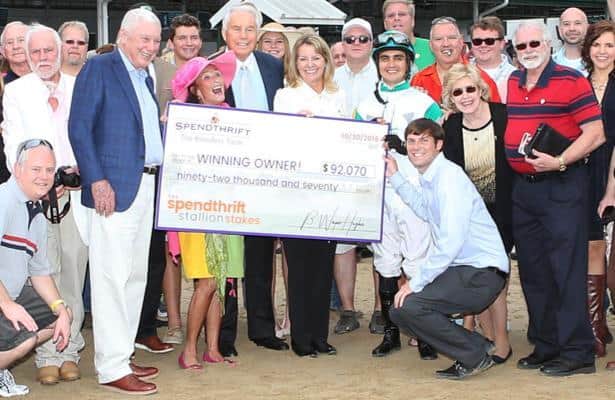 Gary Palmisano Jr. is going from the Gold Room to the board room.

Churchill Downs Inc. tapped its current director of race-day operations as its newest executive director of racing. Palmisano succeeds Hunter Rankin. In the role, Palmisano will be tasked with supporting CDI's commitment to the Thoroughbred industry and help with the implementation of standards and processes of the Horseracing Integrity and Safety Act (HISA) across CDI properties.

"Gary brings a wealth of varied industry experience that ideally positions him for success in this role," CDI president Bill Mudd said. "In addition to strong relationships with key stakeholders, his unparalleled passion and vision for this sport will ensure that Churchill Downs and its racing assets remain progressive leaders in a rapidly evolving industry."

Palmisano joined CDI as a marketing intern in 2007. After completing the Fair Grounds management rotation program, he returned to Louisville to be Churchill's VIP player services manager. As director of race day operations, Palmisano oversaw the Gold Room, including VIP hospitality, assisted with TwinSpires' VIP relations, and helped conceive and develop the Churchill Downs Racing Club.

"This opportunity is a lifelong dream," Palmisano said. "Having grown up on the backside of Fair Grounds with my dad, the late Gary Palmisano Sr., I quickly knew that racing would be my life passion. Ever since moving to Louisville to pursue an equine business degree at the University of Louisville and beginning to work at Churchill racetrack, I've maintained a focus on amassing knowledge so I could serve the industry in a capacity like this."

Palmisano counts trainers and jockeys among his closest friends, is a dedicated member of the horseplayer community, and has worked with industry exectuives throughout the country on myriad projects. Juggling those relationships will be a challenge of representing CDI as its executive director of horse racing.

"That will be one of the hardest parts of the job for sure," Palmisano said. "Every group will have some wins and losses along the way, but I see a big part of my role as helping everyone succeed. It's important to move forward. No one or group will win every battle, but in the long run I hope everyone understands that we're all focused on trying to make the industry better."

One of the external challenges will be managing Churchill's reputation with the industry at large, which has often been tenuous but hit a fevered pitch last year when the company sold Arlington International Racecourse near Chicago.

"As a person with a lifelong racing background – growing up in it and making it my career – it's important to me to see racing thrive, and Churchill plays a role in that," Palmisano said. "Churchill is committed to racing, and my job will allow me to bring stakeholders together to accomplish the goal of moving racing forward."

Palmisano's father, Gary Sr., died Dec. 1, 2021. Fair Grounds will honor the late trainer and paddock judge's memory with a stakes race during its 2022-23 racing season. The younger Palmisano knows what his dad would tell him about doing the job.

"Follow your gut," Palmisano said. "He would be over the moon for this opportunity. He would be so proud that he played such a big part in pushing me in this direction."