Churchill Downs: Dynamic One wins Blame on day of upsets 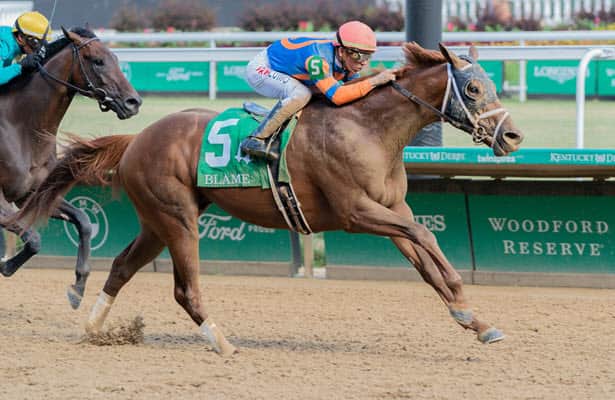 Dynamic One, the “other” horse trained by Todd Pletcher, lived up to his name with a one-length victory over a closing Proxy in Saturday’s third running of the $198,750 Blame Stakes (Listed) at Churchill Downs, a local prep for the Louisville racetrack’s $750,000 Stephen Foster (G2) on Saturday, July 2.

Scalding was a neck back of the runner-up in third and Pletcher’s Grade 1 winner Americanrevolution, the even-money favorite, was fourth.

Long shots Super Stock and Santos Dumont took turns leading the way early on through splits of 23.61, 47.42 and 1:11.73 as Dynamic One had one horse beat all the way into the final turn.

Americanrevolution, who was making his first start since winning the Cigar Mile (G1) in December, drew even with the tiring leaders at the top of the stretch as stablemate Dynamic One tipped out for a wide rally. Dynamic One gained the advantage into the final furlong and inched clear soon thereafter for the win.

“I had a pretty good idea of his running style and let him settle off of the early pace,” Gaffalione said. “He took the kickback really well and had a powerful kick down the lane. It set up perfectly for him and he came rolling late.”

At age 3, Dynamic One qualified to the 2021 Kentucky Derby with a narrow runner-up finish to stablemate Bourbonic in last year’s Wood Memorial. He’d return in the summer to win the restricted Curlin Stakes at Saratoga.

After Americanrevolution, it was Santos Dumont, Super Stock and Militarist to complete the order of finish. Title Ready was scratched.

Dynamic One is a 4-year-old Kentucky-bred son of Union Rags out of the Smart Strike mare Beat the Drums. He was bred by his co-owners, the Phipps Stable.

The Blame is named after the 2010 Eclipse Award-winning older horse that handed Zenyatta her lone defeat in that year’s Breeders’ Cup Classic (GI) at Churchill Downs.

The July 2 Stephen Foster is a “Win and You’re In” event for the Breeders’ Cup Classic (G1) at Keeneland Race Course on Nov. 5.

“He ran a heck of a race this afternoon,” said Pletcher’s assistant trainer Stu Hampson. “I thought the pace would set up pretty well for his running style coming from off of it. He’s a really nice colt and has kept showing improvement this year after coming back as a 4-year-old. We’ll leave it up to Todd and the team to see if we stay here for the Stephen Foster but we can’t be more pleased with his race today.”

Whitham Thoroughbreds’ homebred Walkathon collared pacesetter Lola Flo leaving the final turn, opened a clear lead at the top of the stretch and turned back a late run by 4-5 favorite McKulick (GB) to win Saturday’s 53rd running of the $200,000 Regret Stakes (G3) at Churchill Downs.

The 3-year-old Ian Wilkes-trained filly, who covered 1 1/8 miles on “firm” turf in 1:49.26, gave jockey Julien Leparoux his 1,000th win at Churchill Downs – one of only five jockeys to achieve the milestone.

In the early stages of the race, 32-1 longshot Lola Flo led the field of six 3-year-old fillies through opening fractions of 24.19, 48.46 and 1:12.91 with Walkathon drafting about 1 1/2 lengths behind in second, and the favored McKulick (GB) another couple of lengths back in fourth.

Walkathon was the first to make a move around the turn. She got the jump on her rivals and kicked about five lengths clear at the head of the stretch, which proved to be the winning move to hold off the closing McKulick (GB), who cut the final margin to 1 1/4 lengths.

“She can be a bit hyper and get worked up but that’s just who she is,” said Leparoux, who won the Regret for a record-extending fifth time. “In the race she was able to settle in a good position off (Lola Flo) and she was full of run at the end. I couldn’t ask for anything more. She loves this turf and has really shown that her last few starts.”

Walkathon, the 5-2 second betting choice, rewarded her backers with a $7.20 payout.

Beside Herself was another 6 ¼ lengths back in third under Luis Saez and paid $3.

Kneesnhips was fourth and was followed by Candy Raid and Lola Flo.

“First off I have to congratulate Julien on his 1,000 wins at Churchill,” Wilkes said. “That’s quite the accomplishment and he gave this filly a great trip. She was settled just off the speed in a perfect position. Julien kept her in the clear and she was able to have the perfect trip to the wire.”

Walkathon is a daughter of Twirling Candy out of the Stroll mare Walkabout and was bred in Kentucky by her owner, Janis R. Whitham.

The next turf stakes at Churchill Downs for 3-year-old fillies is the $200,000 Tepin over one mile on Saturday, July 2.

She's All Wolfe scores at 20-1 in the Shawnee

She’s All Wolfe was relegated in last during the early stages as Ava’s Grace led the cast through early fractions of 23.49, 47.56 and 1:11.85 with Army Wife tracking a length back in second and Pauline’s Pearl, the winner of the La Troienne (G1) on Kentucky Oaks Day, another length back in third.

Ava’s Grace cut the corner on the final turn determined to lead all the way and crossed the mile marker in 1:36.73 with Army Wife and Pauline’s Pearl all out to keep up. All the while, She’s All Wolfe tipped out with a wide move and came over the top of the leading trio inside the final sixteenth of a mile with a strong closing kick for the upset win.

“In the first turn she got into trouble but after that I was able to get her to relax up the backside,” Arrieta said. “I know (Pauline’s Pearl) was a big favorite but I thought my filly was going to be just as tough with her again. Around the turn I was able to get closer to the front and in the stretch she was able to keep running hard past those fillies. It’s amazing to win a race like this for Donnie and the owners.”

It was another half-length back to Pauline’s Pearl. Temper Time faded to last.

She’s All Wolfe is a 5-year-old mare by Magna Graduate out of the Include mare She’s All In. She was bred in Oklahoma by her owner.

This was the fifth stakes win of She’s All Wolfe’s career but first against open company. Previously, she won four stakes against Oklahoma-breds: the Cinema at Will Rogers Downs in 2020 and three consecutive runnings of the Oklahoma Classics Distaff at Remington Park in 2020-22.

“I think going into the race we all knew Pauline’s Pearl was the one to beat,” Von Hemel said. “We ran against her the last couple of starts but my filly was training really well out of the (La Troienne) and I was willing to give her another chance. She got into a little trouble in that first turn but she kept battling all the way to the wire. We’re very proud of her and thrilled to win this race.”

The Shawnee Stakes, named after the neighborhood in western Louisville, is the local prep race for the $350,000 Fleur de Lis (G2) on Saturday, July 2.

Veteran Admission Office, off for 462 days, rallies to win the G3 Arlington

Amerman Racing Stables’ veteran homebred Admission Office made his 7-year-old debut a winning one as newly-gelded son of Point of Entry ran down pacesetter Get Smokin at the wire to win Saturday’s 86th running of the $197,500 Arlington (G3) at Churchill Downs by a head.

This marked the first year the Arlington has been run at the Louisville racetrack after previously being staged at the now-closed Arlington Park.

The only two graded stakes wins of his career have come on turf at Churchill Downs. Two years ago, Admission Office won the 1 ½-mile Louisville (G3).

Admission Office, who made his first start in 462 days, was rated in last of six older horses as Get Smokin dictated the terms through early splits of 23.82, 48.77, 1:13.44 and 1:37.24. Admission Office, who remained in last with three-sixteenths of a mile to run, continued to grind down the lane with a wide move and surged at the wire to prevail in a tight photo finish.

“He just kept finding more and more with each stride,” Velazquez said. “He was sitting in a good trip and relaxed off the pace. I tipped him in the clear mid-stretch and he kept accelerating.”

Floriform, the 8-5 favorite under Tyler Gaffalione, was another length back in fourth and was followed by Like the King and Gray’s Fable.

“Being off a layoff, to run like that was phenomenal,” Lynch said. “I thought we had a lot of horse when Johnny turned for home. I’m really thankful for the Amermans for being patient with him getting back to the races. He kept having a few setbacks and it took us a little longer to get back to the track. He’s always had a lot of talent and has run in some serious races in the past. To show up and perform like that against these horses didn’t surprise me because of his back class.”

Admission Office, out of the Royal Academy mare Miss Chapin, was bred in Kentucky by Mrs. Jerry Amerman.

“I’d think staying here for a race like the Wise Dan would be the next move,” Lynch said.

Tamaroak Partners’ Bango split rivals in deep stretch to win Saturday’s 34th running of the $199,833 Aristides (Listed) at Churchill Downs for the second year in a row, this time by 2 1/2 lengths over Necker Island.

Trained by Greg Foley and ridden by Tyler Gaffalione, Bango completed the six-furlong Aristides in 1:08.54.

“He loves this track and is a super nice horse,” Gaffalione said. “We got away a bit slow but sat in a good position off the pace. He kept finding more with every stride.”

Long Range Toddy set a swift early quarter-mile fraction in :21.97 with Top Gunner in close pursuit as Necker Island and Bango rated in fourth and fifth, respectively. Around the turn, Top Gunner poked his head in front after a half-mile in :44.74 and briefly kicked clear. As Top Gunner wearily drifted out in the stretch, the closing Bango came through the opening and was able to easily prevail over Necker Island, who rallied along to rail to win a three-way photo for the place with Top Gunner and Long Range Toddy.

In his first start of 2022, Bango finished fourth and was beaten 9 ¾ lengths in the St Matthews Overnight Stakes on May 4.

“What a nice horse,” said Foley, who also won the 2004 Aristides (G3) with Champali. “He loves this track and that’s home for us. He needed that last race off the layoff and I guess they (bettors) forgot how much he loves it here. He’s 7-for-13 now. That speaks for itself. He got off a bit slow from the rail today and he’s shown he can be a multi-dimensional horse. Tyler gave him a great ride and was able to get him to relax.”

Bango is a 5-year-old son of Congrats out of the Smart Strike mare Josaka. He was bred in Kentucky by his owners Fred and Debbie Schwartz.

The Aristides is named in honor of the inaugural Kentucky Derby winner of 1875.

The next sprint for older horses at Churchill Downs is the $160,000 Kelly’s Landing Overnight Stakes at 6 ½ furlongs on Saturday, July 2.

“Fred and Debbie Schwartz have a really nice horse and we’ll try to run him as much as we can this year at Churchill,” Foley said.