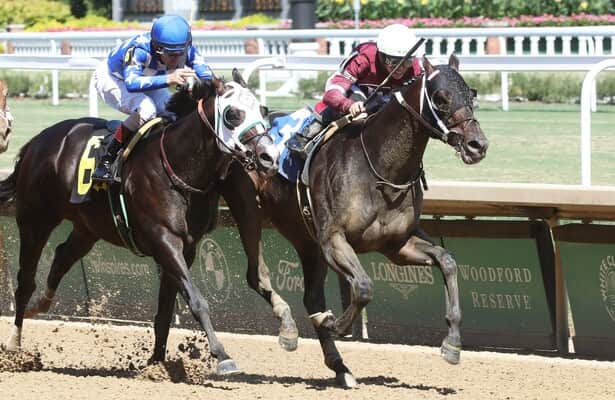 Gunite slipped through an opening along the inside rail at the top of the stretch and determinedly turned back late charges from My Prankster and Hoist the Gold to win Sunday’s first running of the $160,000 Maxfield Overnight Stakes at Churchill Downs by a half-length.

The victory gave jockey Tyler Gaffalione his ninth stakes win of the meet, the most since Robby Albarado won eight in 2005.

Gunite, the 4-5 favorite in the field of six 3-year-olds, clocked seven furlongs over a “fast” track at 1:23.08 for Hall of Fame trainer Steve Asmussen. As a 2-year-old, Gunite won the Hopeful (G1) at Saratoga.

Overtaxed dictated the pace through a first quarter-mile in 23.08 seconds and the half in 46.25 as Gunite tracked in third along the inside rail.

#3 Gunite (4/5) takes the Maxfield Stakes with a refuse-to-lose approach for @Tyler_Gaff and Steve Asmussen.

As the field turned for the homestretch run, a tiring Overtaxed fanned out wide on the lead and opened an inside seam for Gunite to slip through. Gunite grabbed the lead with his rail run with three-sixteenths of a mile left, and he was resolute to hold off late runs from My Prankster, who rallied from last, and Hoist the Gold, who challenged with a four-wide move throughout the lane.

“He didn’t break as sharply today, so I was in a bit of a tight spot at the rail up the backside,” Gaffalione said. “Turning for home I just bided my time and stayed at the rail, and he kicked on well.”

Gunite, a son of Gun Runner out of the Cowboy Cal mare Simple Surprise, improved his record to 8: 3-3-1. The $97,311 first prize boosted his career earnings to $438,099. He was bred in Kentucky by his owner Winchell Thoroughbreds.

“We’re really happy to get him back in the winner’s circle,” Asmussen said. “He didn’t break as sharp today as we expected. Tyler got him in a good rhythm up the backside, and we’re fortunate he was able to win today.”

Gaffalione, who already clinched his eighth Churchill Downs riding title, previously won the Turf Classic (G3) with Santin, the Mamzelle with Twilight Gleaming, the Winning Colors (G3) on Sconsin, the Aristides riding Bango, the Blame on Dynamic One, the Leslie’s Lady with Wicked Halo, the Monomoy Girl aboard Society and the Tepin with Wicked Halo.

For Asmussen it was his meet-leading fifth stakes win. The others were in the La Troienne (G1) with Pauline’s Pearl, the Churchill Downs (G1) with Jackie’s Warrior, the Leslie’s Lady and Tepin with Wicked Halo and the Monomoy’s Girl with Society.

The Maxfield Stakes was named in honor of Godolphin’s eight-time winner who scored in two Grade 1s and won his career finale in last year’s Clark (G1) at Churchill Downs.

Li’l Tootsie collected the first stakes win of her career when Joel Politi’s 4-year-old filly grabbed the lead leaving the turn and drew clear in the stretch. She beat Roc’s Princess by 3 1/2 lengths in Sunday’s inaugural running of the one-mile Anchorage overnight stakes.

Li’l Tootsie, who previously raced in seven consecutive races at six furlongs, prompted the pace set by odds-on 3-5 favorite The Mary Rose – 23.12 and :45.99 seconds – and inched clear inside the final furlong to stop the clock at 1:37.17 over a muddy track while defeating four other fillies and mares.

#4 Li'l Tootsie an easy winner of the Anchorage Overnight Stakes from @ChurchillDowns for @TomAmossRacing to pay $8.40.

“I broke sharp out of the gate, and I could tell I had a lot of horse beneath me,” winning jockey Morales said. “I wasn’t too concerned about the stretch out in distance around the turn, because she was traveling very comfortably. She took off in the stretched and galloped out very easily. I’ve been really thankful for the connections and (trainer) Tom (Amoss) for giving me a lot of opportunities this meet.”

Lil Tootsie improved her record to 16: 6-1-3. The $97,900 first prize increased her earnings to $458,974. She is a daughter of Tapiture out of the Dayjur mare Informative Style and was bred in Kentucky by Davant Latham.

The Anchorage honors a suburb of Louisville.