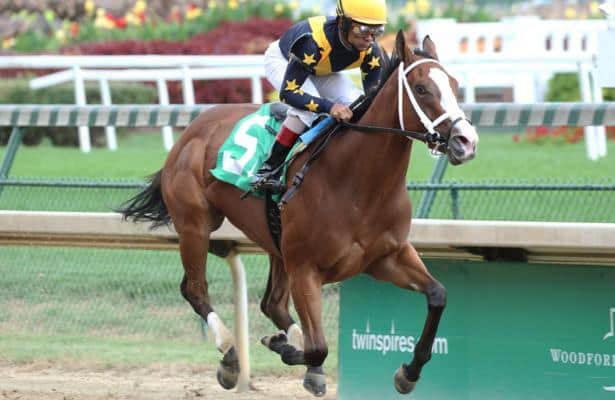 “That was about as impressive as you can get with a first time starter,” Cox said. “We’ve thought very highly of her all along and she showed she’s the real deal.”

Ridden by Shaun Bridgmohan, the 2-year-old filly stopped the clock in 1:10.20 and earned a Brisnet speed rating of 98.

“This filly showed me a lot of talent in the mornings when I’ve been on her,” Bridgmohan said. “She’s got a really nice future ahead of her. She’s smart and does everything professionally.”

Covfefe is named after a popular tweet President Donald Trump sent in May of 2017 that stated, “Despite the constant negative press covfefe.”

The 2-year-old filly is by Into Mischief out of the Unbridled mare Antics.

A possible spot for her is the Oct. 28 Rags to Richest Stakes. Cox-trainer Monomoy Girl, the eventual Kentucky Oaks winner, won that race a year ago.

MEET LEADERS – Perennial leading rider Corey Lanerie began the week atop the jockey standings with five wins through the first three days of racing at Churchill Downs’ sixth annual September Meet. The 15-time local titlist had a one-win lead over Robby Albarado and Ricardo Santana Jr. … Tom Amoss topped the trainer standings with three victories from only five starters. Steve Asmussen, Brad Cox and Vicki Oliver were one win behind. … Calumet Farm, G. Watts Humphrey Jr. and Maggi Moss were in a three-way tie for leading owner with two wins each.

DOWN THE STRETCH – Multiple Grade I-winning sprinter Mind Your Biscuits is expected to log his final breeze Friday morning at Churchill Downs in preparation for next Saturday’s $200,000 Lukas Classic (G3), according to trainer Chad Summers. The colt is scheduled to work at 5:30 a.m.