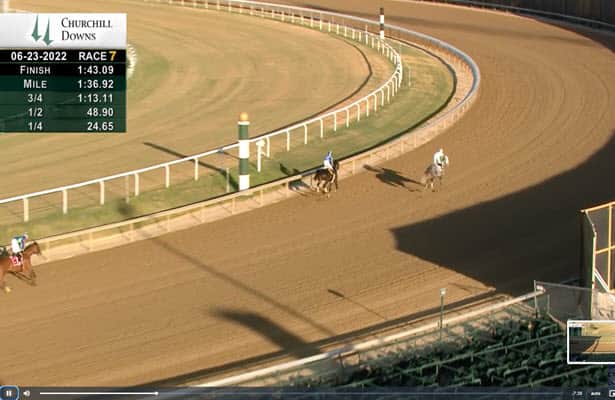 “Hopefully we’ll get to run,” said trainer Brad Cox, winner of three of the last four Wise Dan Stakes. “I’ve got Set Piece for the Wise Dan. He won it last year, so hopefully they’ll get it safe enough to race on again. We’ll see how it goes.”

The decision by Churchill Downs on June 11 to halt racing and training on the turf “for at least two weeks” came after numerous complaints from horsemen and jockeys noting the course’s loose footing and other problems. In its announcement, Churchill Downs’ officials said the hiatus was “in order to allow the turf course to develop its root system.”

While track officials said they are “confident” the course will be ready next week, several horsemen expressed skepticism of the plan to Horse Racing Nation this week. On Friday, Churchill Downs sent out a notice stating turf racing would resume next week as planned, but with a temporary rail.

“Turf racing for next weekend’s stakes events is scheduled to be conducted in Lane 1 and Lane 2, 12 feet from the inside rail,” the notice read.

Nominations have already been taken for the four turf stakes. Each attracted a large group, averaging just shy of 30 nominees.

“Churchill Downs has made it clear that they do not want to use the turf course until the July 4 weekend,” said trainer Tom Amoss, who has six nominated to the turf stakes. “They are filling the races in the condition book, and so we're all planning to run those races on the grass."

A change in plans to move those races to the dirt track could suit many of the nominees, who have been successful on dirt but would be trying turf for the first time.

Entries will be taken and post positions drawn next Wednesday for the July 2 card.