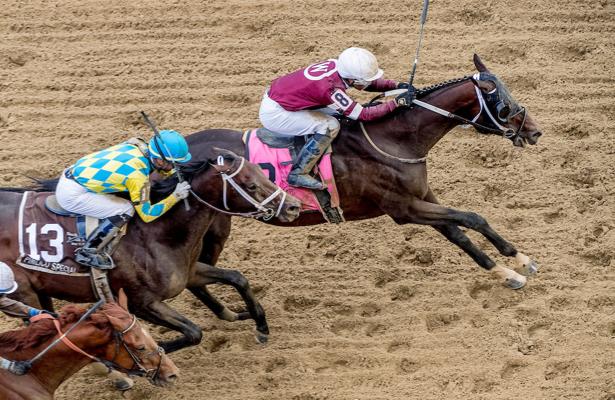 Tenfold, fresh off his first win as a 4-year-old, will run Saturday for a Breeders’ Cup Classic berth.

The Winchell Thoroughbreds colt has entered the fray for Saturday’s Grade 2, $600,000 Stephen Foster at Churchill Downs, trainer Steve Asmussen told “At the Races with Steve Byk” on Monday.

The 1 1/8-mile dirt stakes carries with it a “Win and You’re In” ticket to the Breeders’ Cup Classic, scheduled for November at Santa Anita Park.

David Fiske, racing manager for Winchell Thoroughbreds, told Horse Racing Nation that the Stephen Foster made sense as a next move for Tenfold after his win May 17 in the Pimlico Special Stakes (G3).

“That seemed to be the next logical step for him,” Fiske said. “It’s kind of a home court for him. He likes Churchill.”

Tenfold has never actually raced at Churchill Downs, though he’s worked at the Louisville, Ky., track three times since his win in Baltimore. Most recently, Tenfold breezed four furlongs Sunday in 50 seconds.

The Curlin son has four career wins, three of which came at 3. He won the 2018 Jim Dandy Stakes (G2) and finished third behind only Triple Crown champion Justify and Bravazo in the 2018 Preakness Stakes.

Tenfold ended his 3-year-old campaign with a seventh-place run in August’s Travers Stakes (G1) at Saratoga. His first two races at 4 brought a fourth-place finish March 5 in an allowance optional claiming race at Fair Grounds and a disappointing seventh April 13 in the Oaklawn Handicap (G2).

Under jockey Ricardo Santana Jr., Tenfold rebounded in the Pimlico Special. He came all the way from 12th a half-mile into the 1 ¼-mile race to kick clear for the lead inside the sixteenth pole, then fended off You’re to Blame by a neck for the victory.

“He didn’t like the slop at Oaklawn,” Fiske said. “Then he ran the way we thought he could run at Pimlico. Hopefully he’s on track for the rest of the year.”

Tenfold is one of as many as 13 under consideration for the Stephen Foster, which draws Wednesday and will air live Saturday on NBC Sports Network. Post time is 9:47 p.m.