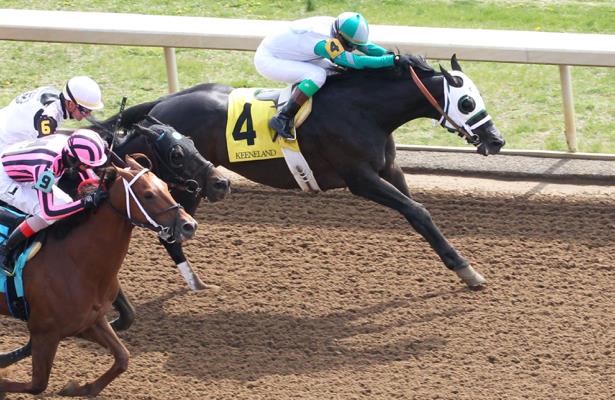 Winner's circle photos do not come much more packed than that of Saturday's Grade 3 Commonwealth Stakes won by Warrior's Club at Keeneland. The victory served as the first graded stakes score for the Churchill Downs Racing Club -- and with its first-ever horse.

"It was phenomenal," said Gary Palmisano, Churchill's VIP player services manager. "We had about 50 members there. Being able to win with our first horse at Keeneland on Blue Grass Day was great."

The Churchill Downs Racing Club formed in 2016 and has since grown to nearly 1,000 members. A nonprofit organization, the club aims to educate people on what it means to be a thoroughbred owner.

Members put up $500, and in doing so get the perks as part of a low-risk experience. The rewards -- monetarily -- are also low.

But the 200 or so people invested in Warrior's Club, a 4-year-old trained by Hall of Famer D. Wayne Lukas, have received plenty of thrills. The son of Warrior's Reward has won five of 22 starts with another stakes victory in October 2016.

“The name describes him about as well as anything – he’s a warrior, I tell you," Lukas said after the Commonwealth. "He’s just a wonderful little horse to train. I always kid people that a used car salesman could train him; he’s not hard to train at all. He gives you every effort, every time.

"And to make 200 people happy is really special.”

The Churchill Downs Racing Club is planning to launch a new opportunity for ownership within weeks, with more information available at ChurchillDowns.com/racingclub. Purse money from Warrior's Club's Commonwealth win will contribute to purchases for the group at upcoming sales.

With his biggest victory to date, Warrior's Club will point next to the Grade 2 Churchill Downs Stakes on the Kentucky Derby undercard.

"That's the plan," said Palmisano, "He'll be back on our home track. A lot of members will get the chance to be there."