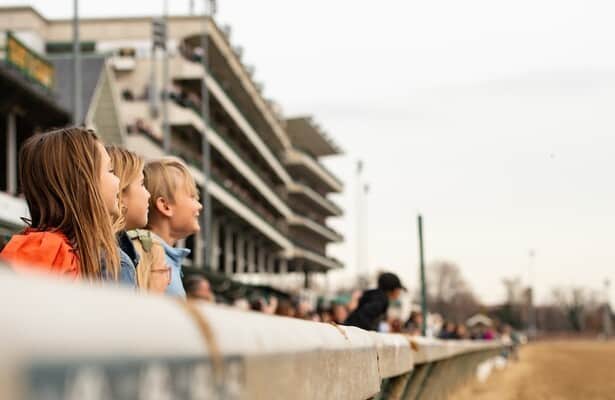 Played Hard broke on top, dictated the pace and turned back challenges at the top of the stretch from Bellamore and Moon Swag to draw clear late and win the Grade 3, $485,000 Falls City, the traditional Thanksgiving fixture for fillies and mares at Churchill Downs.

Owned by Rigney Racing, trained by Phil Bauer and ridden by Joel Rosario, Played Hard ran 1 1/8 miles on a fast track in 1:49.39 while defeating Bellamore by one length in wire-to-wire fashion.

Breaking from post four in the field of six fillies and mares, Played Hard maintained a length advantage over Leader of the Band down the backstretch while setting quarter-mile splits of 23.71, 47.43 and 1:11.43. Leader of the Band gave way leaving the turn as Bellamore, from the outside, and Moon Swag, from the inside, ranged into contention. Played Hard cut the final turn wide and had plenty left as she opened up down the stretch for the one-length victory as the 2-5 favorite.

“She keeps getting better,” Rosario said. “She fought hard on the lead and didn’t want to give it up. There were a couple horses that got close to her, but she never gave way.”

This marked Played Hard’s second graded-stakes win in her last three starts, both coming at Churchill Downs. In September she scored a comfortable, 5 3/4-length win in the Locust Grove (G3) for her first graded-stakes triumph.

“I’m actually pretty speechless right now,” Bauer said. “This is what it’s all about. You win a half-million-dollar race on your home track with your family and the greatest owner (Richard Rigney) in attendance. It can’t get much better on Thanksgiving. I’m so proud of Played Hard. She pinned her ears back and didn’t want to let anyone by.”

“Things didn’t work out last time in the Spinster, but we got her back to Churchill, and she loves it here,” Bauer said. “We’re excited to keep her in training next year.”

Bauer said the goal for Played Hard in 2023 was to secure a Grade 1 win.

Moon Swag, Leader of the Band and Ava’s Grace completed the order of finish.

Played Hard is a 4-year-old bay daughter of Into Mischief out of the Tiznow mare Well Lived. She was bred in Kentucky by Susan Casner.

Dalika does it again, this time in Cardinal

Dalika scored her third front-running, graded-stakes win of the year when she rolled to a 1 3/4-length victory over Perseverancia in Thursday’s Grade 3, $268,500 Cardinal Stakes at Churchill Downs.

Dalika, a 6-year-old mare bred in Germany and owned by Paul Varga’s Bar Mar Equine, ran 1 1/8 miles on firm turf in 1:50.61 to collect the seventh stakes win of her career. Most notably, Dalika determinedly won the Beverly D. (G1) in August at Churchill Downs and followed that with a triumph in the Ladies Turf (G3) in September at Kentucky Downs.

Breaking from post 5 in the field of nine fillies and mares, Dalika established position from the outset, setting fractions of 24.36 and 49.07 seconds while the 8-5 favorite Adventuring rated in second down the backstretch. Curly Ruth attempted to challenge from the outside on the final turn but was quickly dismissed. At the head of the stretch Dalika had a two-length advantage over the chasing Adventuring. Perseverancia, who rated well back in seventh early on, rallied late in the stretch for the place.

“I’ve learned from watching (the late former jockey Miguel Mena) ride her that you just stay out of her way, and she’ll give you her best run,” Hernandez said. “She’s just a solid filly. I told (owner Paul Varga) after the race that she could’ve easily went a mile-and-a-half today.”

“Since we got her as a 2-year-old she’s been so consistent in her races,” Varga said. “She really likes it over here at Churchill. She’s had 31 races in her career at all distances, and she’s given us 10 wins now. She’s so tough on the lead. She’s actually been a seven-time runner-up. This year particular she’s had a tough campaign. Every time it looks like she’s going to get passed she stays game.”

The order of finish was completed by Sunny One, Lake Lucerne, Flippant, Pass the Plate, Curly Ruth and Disappearing Act. Wave of Goodness was scratched.

Prior to the Cardinal, Dalika finished last of six in the $317,282 Fall Harvest on the Breeders’ Cup undercard at Keeneland.

“We just threw her last race out at Keeneland in the Fall Harvest,” Hernandez said. “Things didn’t go her way that day, and that wasn’t the Dalika that we know.”

Dalika, a gray or roan daughter of Pastorius out of the Hurricane Run mare Drawn to Run, was bred by Gestut Ammerland.