Churchill Downs is 'reviewing the facts' behind Cox suspension 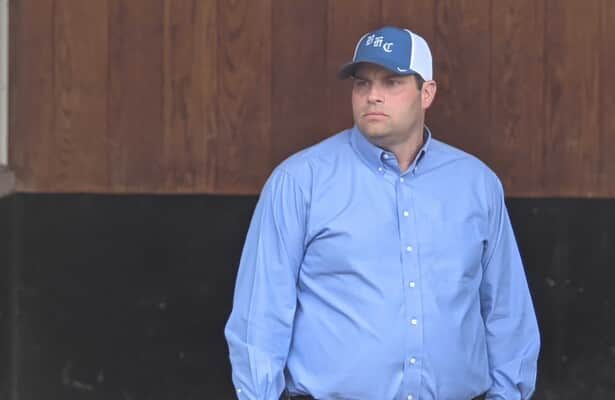 On Tuesday, Horse Racing Nation reported that trainer Brad Cox had been suspended 10 days and fined $500 because of an overage of phenylbutazone in Warrior's Charge in last July's Stephen Foster (G1) at Churchill Downs.

On Wednesday, Churchill Downs issued a statement that said it is "reviewing the facts involved" and that it "will make further comment and take further action when we are prepared to do so."

Post-race drug testing of Warrior's Charge, who finished second in the Stephen Foster, found 2.51 micrograms per milliliter of phenylbutazone. Also known as "bute," it is a regulated non-steroidal anti-inflammatory that is commonly administered to racehorses.

Kentucky rules allow for 0.3 micrograms per milliliter of bute on raceday, which means Warrior's Charge was flagged for an amount considerably higher than that allowed. In a statement by Cox, the Eclipse Award-winning trainer said he was "shocked" by the results "due to the fact this medication was administered within the strict guidelines that are set in place."

Earlier this year, Cox got his first Kentucky Derby win after Medina Spirit was disqualified as the 2021 winner due to a failed drug-test for betamethasone, which is a regulated medication not allowed on race day in Kentucky. Cox's Mandaloun, who finished second to Medina Spirit, was awarded the victory.

The following statement from Churchill Downs was issued late Wednesday:

"Churchill Downs became aware of the failed drug test involving Warrior’s Charge in the 2021 Stephen Foster Stakes with the release of the Kentucky Horse Racing Commission’s stewards ruling 22-0069 issued on May 15, 2022. We take medication overages and drug violations extremely seriously and believe there is no acceptable excuse for not following regulations that are in place in the interest of safety for the horses and protect the integrity of our sport.

"We are in the processes of reviewing the facts involved in this matter and will make further comment and take further action when we are prepared to do so."