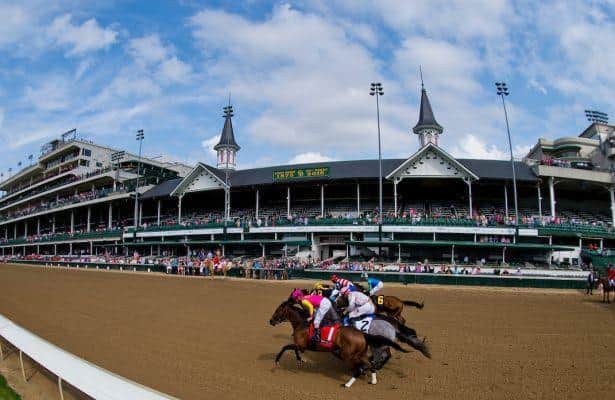 Howling Time, the cleverly named 2-year-old out of the mare Werewolf, was a popular hunch bet on Halloween at Churchill Downs as the 9-5 favorite rolled home to a 3 1/4-length win over Red Danger in Sunday’s ninth running of the $200,000 Street Sense Stakes, the featuring event on opening day of the 132nd fall Meet and 17th annual Stars of Tomorrow I program for juveniles.

Joe Talamo rode the winner for trainer Dale Romans and owner Dennis Albaugh as the Kentucky-bred son of Not This Time clocked 1 1/16 miles over a fast track in 1:44.68.

“It’s pretty fitting a horse with a Halloween theme wins today,” Romans said via phone from Southern California. “I’m just glad it was ours. He won impressively in his debut last month. He’s shown us in his training and his pedigree that he should like stretching out in distance. So, winning at six furlongs on debut was very impressive. Then, to come back and do that today showed how talented he is.”

Breaking from post 5 in the field of seven 2-year-olds, Howling Time was rated in fourth down the backstretch in the clear just behind pacesetter Sport Pepper, who clocked early quarter-mile fractions of 24.65, 49.31 and 1:14.32. Red Danger raced in second and Skippylongstocking was third down on the inside.

Leaving the final turn, Howling Time ranged into contention from the outside and drew even with Red Danger, who took over from the fading Sport Pepper. The two battled gamely together down the stretch but Howling Time relished the extra distance and drew clear for the victory inside the final furlong.

“Turning for home I could feel I had a lot of horse underneath me,” Talamo said. “Around the turn, I smooched at him and he just took off. It’s always special to win for these connections. This horse was very impressive today and really ran well around two turns for the first time.”

Skippylongstocking, Guntown, Sport Pepper and Luni Sima completed the order of finish. Kiss the Sky and Lucky Boss were scratched.

Howling Time is perfect in two starts. He won by 1 1/2 lengths in his six-furlong debut on Sept. 25 at Churchill Downs.

“This horse was a later purchase at Keeneland last year,” said Jason Loutsch, racing manager for his father-in-law, Albaugh. “We have to give the credit to Dale because he was in the back ring at the time and called us to say we had to have this colt. We knew what he did on his debut was impressive, because Dale doesn’t necessarily have them cranked all the way to win first out. Then he worked well out of it and was really impressive today going two turns for the first time.”

Susan Moulton’s Sandstone dictated the pace, turned back a challenge from 3-5 favorite Yuugiri at the top of the stretch and drew away inside the final furlong to comfortably win Sunday’s ninth running of the $197,500 Rags to Riches for 2-year-old fillies by 10 3/4 lengths.

Ridden by Brian Hernandez, one of four winners on the day, and trained by Kenny McPeek, Sandstone ran 1 1/16 miles in 1:44.18 while making her two-turn debut. Previously, she broke her maiden by nine lengths while running one mile over a sloppy main track at Churchill Downs in her second career start on Oct. 3. Her debut on May 28 at 5 1/2 furlongs resulted in a fifth-place finish.

Sandstone led the compact field, which was reduced to four following the scratch of Dressed, through early fractions of 24.51, 48.55 and 1:13.11 with Yuugiri no more than a length off her right hip. Manasota Sunset was a couple lengths back in third and Mama Rina raced far back.

#Sandstone rolls home to dominate the Rags to Riches Stakes at @ChurchillDowns with @b_hernandezjr in the irons for @KennyMcPeek.

Yuugiri, a 7 1/4-length debut winner at Churchill Downs on Sept. 17, drew even with Sandstone leaving the far turn but the winner responded to that challenge at the three-sixteenths pole and displayed an impressive turn of foot along the rail with overwhelming authority under mild urging from Hernandez.

“I saw going into the race that my filly could go to the lead if she needed to,” Hernandez said. “When I saw no one making an early move I was confident she’d run a good effort from there.”

“Sometimes we don’t always have the most stellar summers but come around in the fall,” McPeek said. “This is a big filly and really impressive. She’s big, but she has a lot of speed. She’s fast and very well built. That was a really nice effort.”

By 2011 Preakness and 2012 Clark (G1) winner Shackleford, Sandstone is out of the 22-year-old unraced Seattle Slew mare Seattle Shimmer. The dark bay or brown filly was bred in Kentucky by Mark Stansell and Cindy Stansell.