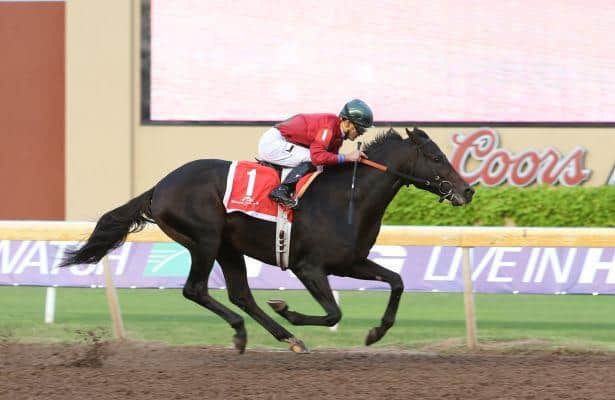 Chocopolgie’s sire, Candy Ride (Arg), retired undefeated with six wins in six tries, including a victory in the Pacific Classic at Del Mar. Candy Ride was forced to retire early because of injuries. His 4-year-old dark bay son, who won the $175,000 Governor’s Cup on Sunday at Remington Park apparently inherited his daddy’s side of injuries, and success.

For the fifth time in 10 career starts Chocopologie had his picture taken and he wasn’t even breathing hard after drawing off to a five-length win. It was the seventh time in a row this horse has run no worse than second, winning four times in that run, so one might think he was the favorite, right? Guess again. Those who had faith in his bloodlines and ability were rewarded with 9-1 odds and a payout of $21.20 to win, $6.40 to place and $4.60 to show.

Chocopologie ran a beaten second in the Grade 2, $400,000 Super Derby at Louisiana Downs in 2015 to Mobile Bay who was also in the field at Remington Park Sunday.

“We evened the score,” said Devereux, “and that’s OK.”

The odd thing about this horse is that as successful as he has been, this was the fourth race in a row he has had a different jockey. However, the last time Colby Hernandez was on his back he won by seven lengths, the same picture that showed up at Remington Park. The reunion was a joyous one as Hernandez put his mount through an opening near the rail at the top of the stretch in order to succeed.

“My dad taught me a lot,” said Hernandez, who is the son of Brian Hernandez. “And this horse will run through anything. We didn’t have much room and he just put his head down and went. I had plenty of horse left.”

Chocopologie is owned by Preston Stables of Paris, Texas and earned $105,000 to pad his career bankroll. He now has $267,525 with 10 starts, 5 wins, 3 seconds and 2 thirds. He is out of the Mineshaft mare Highest Class and was bred in Louisiana by Coteau Grove Farms.

The moment for the winning horse in the Flashy Lady Stakes was when the starter popped the gate. That’s when Moment is Right went straight to the lead and never looked back. Rider Florent Geroux milked the lead in this 6-furlongs sprint race from start to finish holding off a strong charge from Wheatfield for the win in the $50,000 Flashy Lady Stakes.

Geroux won for Hall of Fame trainer Steve Asmussen aboard this 3-year-old filly by Medaglia D’Oro in a time of 1:09.92, padding the states for the second-leading trainer all-time at Remington Park, who is also a member of the Oklahoma Horse Racing Hall of Fame to go with his national accolades.

The favorite in the race, Steel Cut, was just back of Wheatfield, to finish in the show spot.

Moment is Right was making her debut at Remington Park for owner Ten Broeck Farm Inc. out of Washington state. She had been heavily immersed in stakes races since breaking her maiden by almost nine lengths in her first try at Gulfstream Park in Florida as a 2-year-old in May 2015. This dark bay filly immediately impressed by winning her first effort against stakes horses in the $250,000 Astoria B Stakes at Belmont Park under jockey Joel Rosario.

This was her second stakes victory, but had not won in stakes company in her last five efforts in New York, Kentucky, Maryland and California.

It was the first time Geroux had been in the saddle for this horse but they clicked like a timely watch.

Moment is Right pushed her record to three wins in nine tries with another two runner-up efforts. She was bred in Kentucky by Woodford Thoroughbreds.