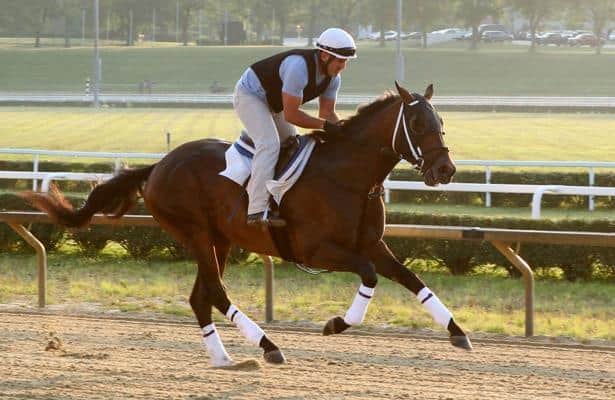 A couple of in-form 3-year-olds who have shown indications that longer distances may be to their liking could have a say in the outcome of the Grade 3, $500,000 West Virginia Derby on Saturday at Mountaineer Casino, Racetrack & Resort.

The connections of Pennsylvania-bred Chilly in Charge believe the 3-year-old colt is coming into his own after a pair of victories.

And Maryland-bred Top Line Growth enters the Derby with a record of three wins in four starts, albeit one via disqualification.

Owned by Samantha Reagan’s Newtown Anner Stud, Chilly in Charge was a 12-length winner of the state-bred Crowd Pleaser Stakes at Parx Racing on June 22.

The 1 1/16-mile stakes marked the first start around two turns for Chilly in Charge, who in his previous start broke his maiden in a seven-furlong event on the synthetic surface at Woodbine.

Chilly in Charge could have been entered in a Pennsylvania-bred stakes for 3-year-olds and older at Parx on Saturday, but his connections set their sights higher.

“This horse keeps improving every race,” said trainer Miguel Vera, who is based at Monmouth Park in New Jersey for the summer and Maryland in the winter. “I like his chances and think he has a shot in this spot, and the owner wanted to take a shot.

“There are a couple of tough horses (in the Derby), but I’m figuring he can be right there.”

Chilly in Charge arrived at Mountaineer on Wednesday.

Vera had hoped to gallop the colt on the surface the following day, but there is no training at Mountaineer on Thursdays, so he did so Friday.

“It’s his first time here and I wanted to see how he handled the surface,” Vera said. “He handled it very well.”

Vera, who began training in 2011 and is closing in on 100 wins, has tabbed Horacio Karamanos, one of the leading jockeys in Maryland, to ride Chilly in Charge, who drew the outside post 10.

Karamanos rode the colt in a fourth-place finish at Parx in March.

By Take Charge Indy out of the Harlan’s Holiday mare Holiday Chills, Chilly in Charge was purchased for $170,000 at the Ocala Breeders’ Sales Co. 2-year-old sale in 2018.

Newtown Anner Stud in 2019 is well on its way to eclipsing its best year by wins and earnings, which came last year.

As for Top Line Growth, the gelding by Tapizar out of the Whywhywhy mare Orinoquia made a splash when he made his first start April 22 at Laurel Park in Maryland.

He grabbed the early lead and gradually increased his winning margin to 9 ½ lengths at the finish in the two-turn maiden race at 1 1/16 miles.

Before Top Line Growth made his next start in a stakes at Pimlico Race Course in May, trainer Kelly Rubley discussed his development.

“He’s just a big, growthy horse and he has actually been in my barn for a year now,” said Rubley, whose horses have earned more than $1.1 million so far this year. “We took our time (with him). The owners were wonderful.

“I kept telling them this horse is wonderful and he’s worth the wait.”

After a fifth-place finish at Pimlico, Top Line Growth won a state-bred allowance event at Laurel by eight lengths, and July 5 crossed the wire second, two lengths behind Winning Number, in the $250,000 Iowa Derby at 1 1/16 miles.

But Winning Number was disqualified for interfering with the eventual third-place finisher, so Top Line Growth was placed first.

Maryland-based Julian Pimentel, who has ridden Top Line Growth in his four races, has the call again.

Top Line Growth is owned by Stuart Grant’s The Elkstone Group, which also bred him.

The entity is involved with other partnerships but on its own is credited with more than 680 wins and $18.76 million in earnings.

First post time for Derby Day at Mountaineer is 2 p.m. EDT. The Derby is scheduled to be run at 5:35 p.m. as the eighth of nine races.

There are no Ky. Derby points, but Newgate wins Bob Lewis
Bob Baffert couldn’t lose. The trainer of all four...