The Ben Perkins Jr. runner has been part of the trifecta in all five career starts and his early-pressing speed should play well in a race that came up a bit light on pace. Carlos Marquez Jr. takes his usual seat aboard the Vindication colt.

Todd Pletcher sends out prominent throughout threat Escort. The Claiborne Farm colt exits a disappointing try in a productive optional claiming synthetic sprint at Keeneland. He captured back-to-back dirt sprints at Gulfstream prior to his Polytrack flop and looms a pace factor at the very least under John Velazquez.

Diski Dance typically lands in the exacta and adds blinkers to his equipment. He finished a nose in front of Vengeful Wildcat at Aqueduct in March and is the likely target.

The Chick Lang Stakes goes as the 6th race on Preakness Saturday and the field also includes Ghost Is Clear, Chipshot, Wicked Thunder, Road Ready, Philippe, and No Easy Answer. 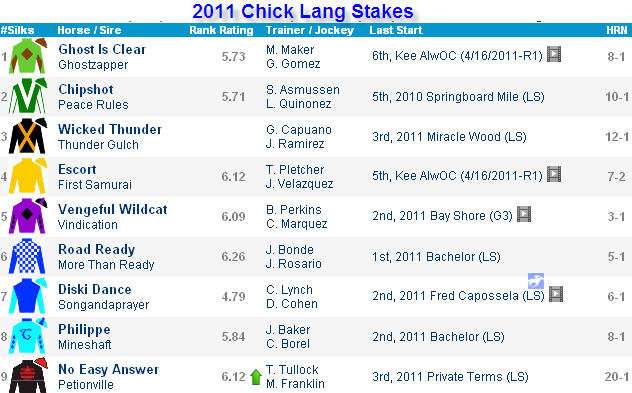