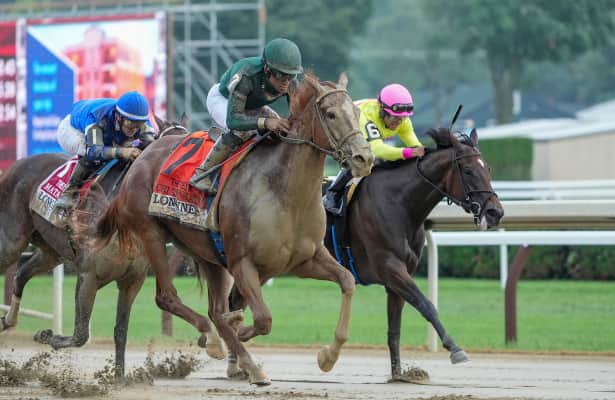 The 97th running of the Test – one of three Grade 1, $1 million events on the day – saw Chi Town Lady, off at 17-1, notch her first career graded stakes win. The Wesley Ward trainee improved to 2-for-2 at the Spa, following her previous lone stakes win in last year’s edition of the Bolton Landing.

Breaking from the outermost post 7 in the seven-furlong race on a "good" main track, Castleton Lyons’ Chi Town Lady settled at the back of the pack under jockey Joel Rosario as Hot Peppers led the field through an opening quarter-mile in 22.54 seconds and the half in 45.28 seconds on the sealed track.

?Hot Peppers, under jockey Luis Saez, maintained the advantage out of the turn, but Matareya made a strong charge from her outside under Flavien Prat. The duo rode stride-for-stride in the stretch as Chi Town Lady surged from the far outside before angling in. With the trio jostling for position, Chi Town Lady pulled ahead to finish 1 1/2 lengths in front of runner-up Hot Peppers, completing the course in a 1:23.87 final time.

Hot Peppers edged Matareya by a neck for second, and a stewards’ inquiry involving the three-top finishers for the stretch-drive bumping resulted in no change to the trifecta. Sterling Silver, Wish You Well, November Rein and Elm Drive completed the order of finish.

“We got lucky. She had been training great and I was looking at this race after her last race in my mind and gave her a little time because she started coming from behind,” said Ward, who won the Test for the first time in his career. “I had Joel work her here a couple of times and she was just working phenomenal.

“I told the owners we were probably going to be running a (long) shot, but I wanted to take one shot from way back and do what she’s been asking me to do, which is make a big charge and a big grind,” he added. “We were hoping for a second or third – a graded placing – to see if the race fell apart, and here we are in the winner’s circle. She’s come a long ways. I just think that I had to kind of learn to listen to her to where she wanted to go easy the first part and come on late. This will be her running style from now on.”

Rosario won the Test for the second time in four editions, having ridden Covfefe in 2019. He said Chi Town Lady had plenty in reserve for the finish.

“They went fast in front and she came with a run. That was an amazing race,” Rosario said. “It looked like they came out a little bit and I ran into them a little bit, but it looked like they were coming more from the inside. My horse was kind of on the wrong lead at that point and I was correcting her trying to keep her straight. She did great.”

Rosario, who won the Glens Falls (G2) aboard War Like Goddess earlier on the card, now has 10 graded wins at the meet.

Hot Peppers, owned by Michael Dubb and Michael Caruso and trained by Rudy Rodriguez, won her graded stakes bow in her previous race in the Grade 3 Victory Ride last month at Belmont Park and moved to 5-2-0 in eight career starts.

“She ran her race, tried hard and did what she could," Rodriguez said. "Right now, we'll see how she comes out of the race and take it day by day. I'll talk to Mr. Dubb and we'll see where we are."

Godolphin homebred Matareya entered 4-for-4 as a 3-year-old before settling for third in the Test for trainer Brad Cox.

“My first thought was I didn’t think she was travelling that well down the backstretch,” Cox said. “Flavien thought the same; she wasn’t really taking them up there. I thought he did a good thing at the three-eighths pole by dropping her down to the inside. It’s probably a sign of her just not getting a hold of the track. No excuse really. I think she’s a very good filly. Obviously, she showed up and maybe not a favorable surface for her, and she still ran a good race.”