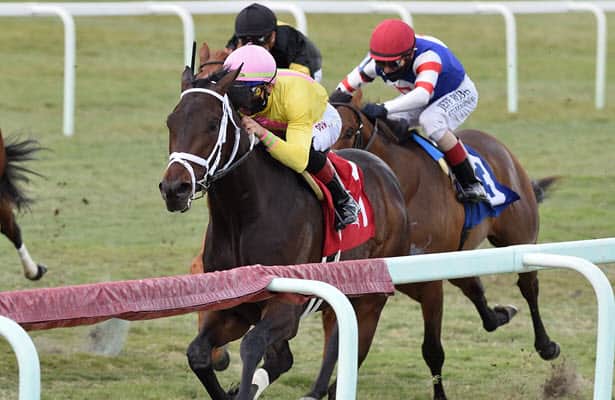 Michael Dubb, Steven Bouchey, Bethlehem Stables and Chester Bishop’s Chess’s Dream got a ground-saving trip under Tyler Gaffalione and slipped through an opening along the rail in mid-stretch to upset Saturday’s $100,000 Kitten’s Joy (G3) at Gulfstream Park.

Fresh off his maiden triumph in a 7 ½-furlong turf sprint Dec. 13 at Gulfstream, Chess’s Dream ($18.60) completed the distance in 1:35.18 over a firm course to become the first stakes winner for sire Jess’s Dream, a son of Hall of Famers Curlin and Rachel Alexandra.

Based at Gulfstream with trainer by Mike Maker, Chess’s Dream is also a half-brother to 2019 Kitten’s Joy winner Casa Creed. He was cross-entered in Sunday’s Texas Turf Mile at Sam Houston.

“It’s very nice when you make the right decision. It’s definitely a 50-50 proposition,” Dubb said. “I held my breath and made sure he’d be able to get through. He got through and he was much the best, so we’re just over the moon.”

Flanked by 1-5 favorite Never Surprised, making his sophomore debut after going unbeaten at 2 capped by a victory in Aqueduct’s Central Park, Chess’s Dream settled in third as Original, a 12-1 long shot shipping in from New York, ran a quarter-mile in 23.30 seconds and a half in 47.54 pressed by Kentucky Pharoah, a winner of his last two starts over the same course and distance, including the Dania Beach Jan. 2.

Gaffalione stayed patient as he remained in striking position on the turn awaiting room, which materialized once the field straightened for home. Gaffalione sent Chess’s Dream through and the Florida-bred colt sprinted clear to win by two lengths as Never Surprised emerged from a three-way photo finish with Original and Sigiloso for second. Kentucky Pharoah and It’s a Gamble completed the order of finish.

“I knew there was going to be a lot of speed. It kind of surprised me when Johnny [Velazquez on Original] committed early, but I had the perfect position down on the fence. I was able to save ground,” Gaffalione said. “On the far turn, in looked like Johnny’s horse was trying to get out a little bit on him. I didn’t panic and a hole opened up and when I asked him he really accelerated. He’s a long-striding colt. He’ll just get better the longer he goes.”