Cheermeister proves much the best in Gulfstream's Herecomesthebride 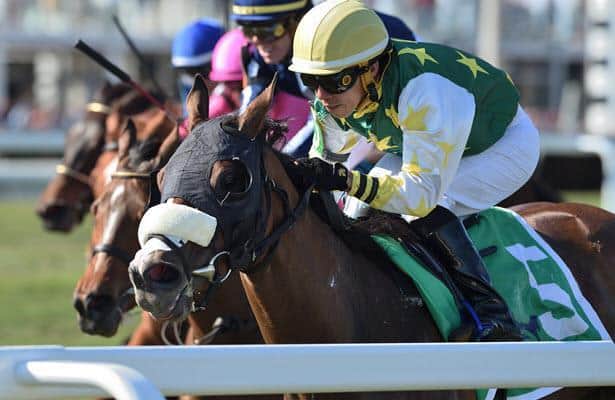 Photo: Coglianese/Ryan Thompson
Cheermeister broke on top in the $150,000 Herecomesthebride Stakes (G3) and never relinquished her position for a one length win over Abscond in the 1 1/16-mile turf event.

Jockey Emisael Jaramillo sent the 3-year-old filly straight to the lead and had enough in reserve in the stretch to score her second straight stakes triumph – and third overall – for owners Teresa and David Palmer.

Cheermeister entered the Herecomesthebride off a victory in the Sweetest Chant Stakes (G3) at Gulfstream on Feb. 1. She has now won four of her five career races, all on the grass.
Winning trainer Armando De La Cerda told reporters after the race, “I think she’s a nice, nice filly. I’m always thinking that she’s going to be better when she’s 4 or 5 because she’s very temperamental and very high strung. That’s why she broke bad from the gate two races ago. I’ve been working her in the gate to get her better. She’s going to be a nice filly.
“I didn’t need to tell Emisael anything. He knows she needs to be in front.”

Winning owner David Palmer added, “It was her first time going a mile and a sixteenth, and we just felt pretty confident that if (jockey Emisael Jaramillo) got her on the lead and she was able to relax that she would do what she did. There were a lot of nice fillies in there, not to take anything away from them, but she did get her way up front and she’s a nice filly. We raised her at the farm. We bought her and broke her and trained her. It’s a family thing. It’s a lot of fun and we’re blessed to be here. It’s really special.”

Monomoy Girl to get 'brief break' due to muscle soreness
Two-time champion Monomoy Girl will be given "a br...

Why one new shooter skipped Ky. Derby to run in 2021 Preakness
Who skips the Kentucky Derby to get to the Preakne...