Kentucky Derby rankings: Who's missing and who's up next? 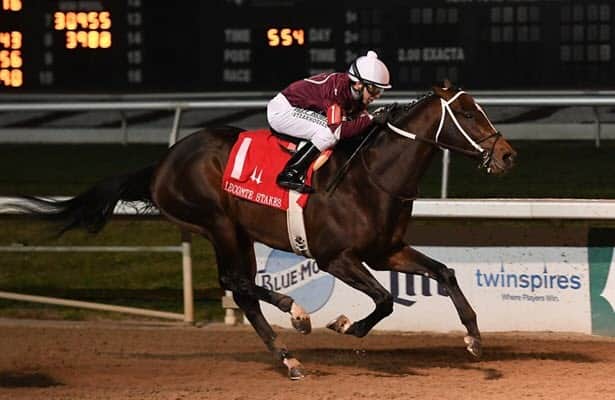 With the 2021 Kentucky Derby now just three and a half months away, it is a good time to take inventory on 3-year-olds that have not been heard from in awhile.

Dr. Schivel and Get Her Number are two of a handful of juvenile Grade 1 winners on the Derby Trail, but many are wondering where they have gone.

Dr. Schivel was scheduled for a 90-day rest after his win in the Del Mar Futurity (G1) in late summer, but 135 days later he has yet to record a workout.

Get Her Number worked on Oct. 10 after his win in the American Pharoah (G1) as he targeted the Breeders' Cup Juvenile. But he was withdrawn from consideration after mild bone bruising and has yet to resurface.

Todd Pletcher's Restored Order and Doug O'Neill's Team Merchants, two of the most impressive juvenile maiden winners at Saratoga last summer, have not recorded a work since September.

Bill Mott's sharp maiden winner Speaker's Corner worked one time on Nov. 25 following his maiden win but has not been seen since.

With no activity for months, it is time to start questioning whether these runners will be able to recover from their setbacks in time to prep for the first Saturday in May.

On the positive front, another impressive Bill Mott maiden winner, Olympiad, had his first work in months on Tuesday as he looks to build on his Saratoga victory.

Chad Brown's Highly Motivated had his first work on Saturday since his win in the Nyquist Stakes on the Breeders' Cup undercard. He is at Palm Meadows, and the Fountain of Youth (G2) at Gulfstream on Feb. 27 seems like a reasonable target should Brown decide he wants to try him around two turns at that time.

Breeders' Cup winner Essential Quality, runner-up Hot Rod Charlie, and fourth-place finisher Jackie's Warrior all are back to working consistently with specific targets in mind. Essential Quality is likely to run in Fair Grounds' Risen Star on Feb. 13. Hot Rod Charlie is slated to make his 3-year-old debut in Santa Anita's Robert B. Lewis Stakes (G3) on Jan. 30. Jackie's Warrior looks to be headed to Oaklawn Park for the Southwest (G3) Stakes.

Here is a closer look at the status of 10 horses that are ranked in the top 30 of HRN's 3-year-old rankings and have not raced in the last two months or more.

Time will tell whether Midnight Bourbon, Proxy and Mandaloun are at the ability level of some of the prospects mentioned above. But unlike those runners, they have recency on their side.

That trio of colts ran 1-2-3 in last weekend's closely run Lecomte Stakes (G3) at Fair Grounds. Third-place finisher Mandaloun was flirting with the top 10 in HRN's Rankings heading into the Lecomte, but Midnight Bourbon and Proxy were the two biggest movers in this week's ranks after running first and second, respectively.

Proxy has risen to No. 10, while No. 11 Mandaloun remains slightly ahead of Midnight Bourbon, No. 13.

Essential Quality retained his large lead for the No. 1 spot, but Highly Motivated sneaked into the No. 2 spot following his first workout since his Nyquist win, which netted him a 96 Beyer Speed Figure.

Remsen winner Brooklyn Strong held steady at No. 3 despite news that he will miss his next scheduled start in the Withers (G3) after becoming sick and missing training.

Sham Stakes (G3) winner Life Is Good, arguably the most polarizing horse on the Derby trail thus far, lands at No. 4 this week. Hot Rod Charlie rounds out the top 5.

Friday's Smarty Jones Stakes at Oaklawn Park will offer top 3-year-old prospects the next opportunity to prove themselves. Caddo River, an impressive maiden winner at Churchill Downs for Brad Cox, will look to jump into the top 10 with a breakthrough performance.

The contender rankings are generated by user and staff ratings for top 3-year-olds. If the list is missing a horse you are watching, you may add that horse, rate it and watch it climb the ladder. Click here for more on HRN's Power Rankings and voting.

Below is a screen shot of the top 20 contenders. Click here to see the complete rankings list of top horses for the 2021 Kentucky Derby. 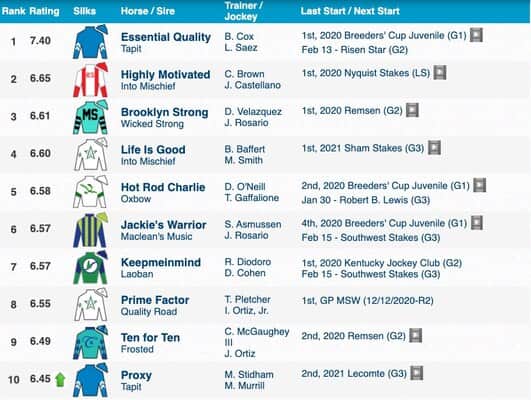 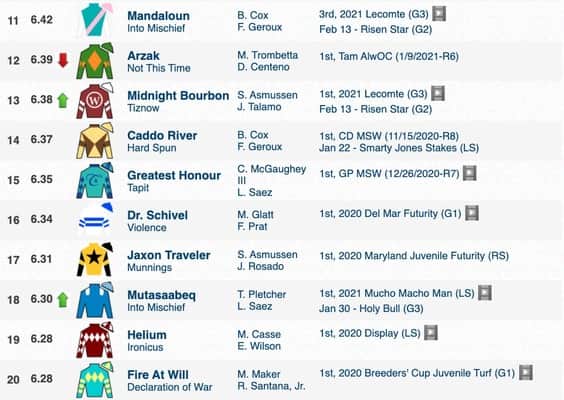