Checkered Past Tries to Make Grade in Ontario Matron 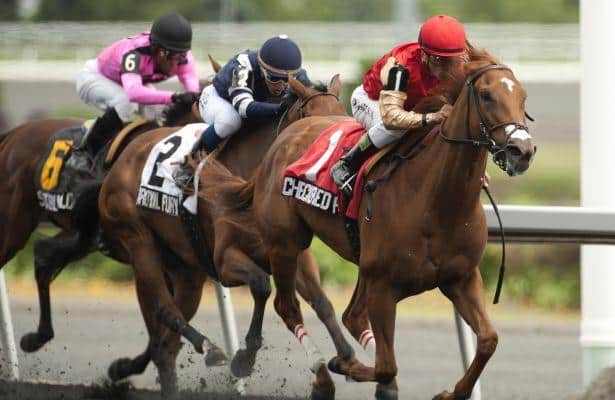 Sam-Son Farm's homebred Checkered Past will try to make the grade in Saturday's $150,000 Grade 3 Ontario Matron Stakes, at Woodbine.

Trained by Malcolm Pierce, the chestnut daughter of Smart Strike-Catch the Flag arrives at the 1 1/16-miles route over the Woodbine main from a brave neck score in the Trillium Stakes under rider Eurico Rosa da Silva, on June 13.

Sent to post at odds of 9-1 in the Trillium, Checkered Past stalked the early speed of Unspurned in the 1 1/16-mile test and was checked by the leader in the late stages only to re-rally and collar Unspurned in the shadow of the wire, with Ontario Matron rival Uchenna an even fourth.

“She was very focused,” recalled da Silva of the Trillium score. “Sometimes that (being checked) can be a big excuse for them to stop running, but she made that effort to come back again which isn't easy for her because she's a big filly.”

Checkered Past worked a comfortable four furlongs in :50 flat on July 18 in her final prep for the Ontario Matron.

“She's getting better and better,” said da Silva. “Last time she ran a very big race and that didn't surprise me. I believe she will run big again. I breezed her last time and she's doing very well.”

The talented chestnut boasts an impressive record of 5-0-1 from six starts at the 1 1/16-miles distance. She made her graded stakes debut in May in the Grade 3 Hendrie, a 6 1/2-furlong 'Poly' sprint won by Ontario Matron rival Skylander Girl.

Strut the Course, a John Unger homebred trained by Barb Minshall, is the likely favourite in the Ontario Matron following her impressive score in the Grade 2 Dance Smartly Stakes, a 1 1/8-miles tilt over the E.P. Taylor Turf Course on July 5.

The Strut the Stage bay earned Sovereign Award honours as Canada's champion older female in 2014 after winning four of eight starts including scores in the Classy n' Smart and Grade 3 Maple Leaf Stakes.

The five-year-old mare was a rallying fifth, defeated just two lengths, when making her seasonal debut in the grassy Grade 2 Nassau Stakes.  Last time out, Strut the Course, with Luis Contreras up, stalked the early foot of Solid Appeal before launching a three-wide rally to win a three-horse photo by a head over a charging Watsdachances, who was a 1/2-length better than Solid Appeal.  Contreras retains the mount.

Saturday's card also features the $125,000 Colin Stakes, a six furlong 'Poly' sprint for two-year-olds.  Hollywood Hideaway, winner of the Victoria Stakes by disqualification on debut, headlines a field of eight. Contreras will ride the Zensational grey for Minshall as the duo seeks a stakes double on the day.

Da Silva will pilot Feelin Groovy, an easy four-length winner on debut, for owner-trainer Bob Tiller in the Colin. The Kentucky-bred son of Not Bourbon earned a 47 Beyer Speed Figure for his effort.

“The horse is still learning but he won very easy last time,” said da Silva. “I still had more horse if somebody came to him. I didn't work him, but Tiller's horses always show up ready to run.”

A strong field of juveniles includes shipper The Zip Zip Man who arrives from a swift score in an Arlington Park maiden allowance that earned an 83 Beyer number.  Florent Geroux will ride the City Zip chestnut for trainer Michael Stidham.

Tizzarunner , a $325,000 purchase at the March OBS, debuts for trainer Mark Casse and owner John Oxley.  The dark bay son of Tizway will be ridden by Patrick Husbands.

Riker, A Masculine Child, No More Chillin, and Mykonos complete the field.

The Ontario Matron is slated as Race 8, while the Colin will go as Race 4 on Saturday's 10-race card.  First post time is 1 p.m. Fans can watch and wager on the card via HPIBet.Com.