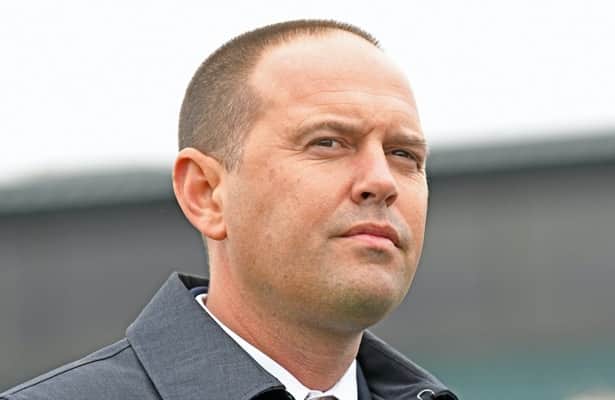 The path to the Kentucky Derby is going to go through New York for Chad Brown.

Brown, a four-time Eclipse Award winner for top trainer, has two horses on the Triple Crown trail. Both of them will prep for the May 1 Kentucky Derby in New York.

Highly Motivated, who has been training this winter under Brown’s eye at the Payson Park Training Center in Florida, will hit the road next week and run in the $300,000 Gotham (G3) at Aqueduct on March 6.

Brown’s other Derby contender, Risk Taking, has spent the winter months in the cold Northeast. Risk Taking won the $250,000 Withers (G3) at the Big A on Feb. 6, and he will stay in New York at Belmont Park.

Both horses are owned by Seth Klarman’s Klaravich Stable.

Highly Motivated’s start in the Gotham will be his first race of 2021. The son of Into Mischief won two of three starts as a 2-year-old, the last being a 4 1/4-length romp in the Nyquist Stakes at Keeneland on Nov. 5, the Friday of Breeders’ Cup weekend. His two wins came at 6 1/2 furlongs; the Gotham is a mile.

The colt has had six works at Payson Park since, the latest a five-furlong effort in 1:02.4 last Saturday. Hall of Fame rider Javier Castellano will make the trip from Florida to Aqueduct to ride. Castellano, who rode Highly Motivated in all three of his starts last year, returned to riding last week after having surgery near his hip last November.

Brown said Highly Motivated will have one more work in Florida before heading for New York.

“He is good for the Gotham,” Brown said by phone from Florida. “We are excited about him. He has always been a good-sized, strong-looking colt. Each work off the layoff has been better and better, which is what you expect. All signs are pointing that he will give a good account of himself in his first race as a 3-year-old. We will see.”

Risk Taking broke his maiden at Aqueduct last December and started his 2021 with a 3 3/4-length win in the Withers. Both of his wins have come at 1 1/8 miles, which is the same distance as the Wood.

Having a top 3-year-old spend the winter in New York (under the care of assistant Dan Stupp at Belmont) is not new for Brown. He said he did the same with Cloud Computing, who won the Preakness in 2017. Before that, Cloud Computing started his career in the winter of 2017 with a maiden win at Aqueduct followed by with a second in the Gotham and a third in the Wood.

“How it works through the winter depends on what kind of winter you have and where you kind of dodge the storms,” Brown said. “For (Risk Taking) he has been so far — knock on wood — on the right side of getting around those storms. He has been able to have his works and has been dancing parallel with the weather.”

When he won the Withers, Risk Taking was ridden for the first time by Aqueduct regular Eric Cancel. Brown said that Cancel will “most likely” be in the saddle for the Wood.

The added distance has benefitted Risk Taking, and, so too, has the addition of blinkers in the last two starts.

“I think that has helped a lot,” Brown said. “Some of it is just racing experience, but yes, they have made a difference as well.”

Brown said these two are his only horses he envisions being on the Derby trail. He likes what he sees so far but also realizes there is a long way to go until the first Saturday in May. Both horses have work to do if they are to earn a spot in the Kentucky Derby.

Risk Taking has 10 points in the Derby points standings. First place in the Gotham is worth 50 points, 20 for second, 10 for third and five for fourth. Highly Motivated does not have any points and will need a big finish in the Wood to earn a spot in the Churchill Downs starting gate. The Wood is worth 100-40-20-10 points.

“There is a lot of racing to go,” he said. “We want to keep the horses healthy. They have to develop, and they have to prove they can go that far. A lot of horses are emerging weekly, so it looks like a strong crop so far. Something else could pop up for us — probably not for the Derby — but that is not to say they are the only two of our (3-year-old) crop. These two have a chance based on the fact they will participate in some of the preps.”