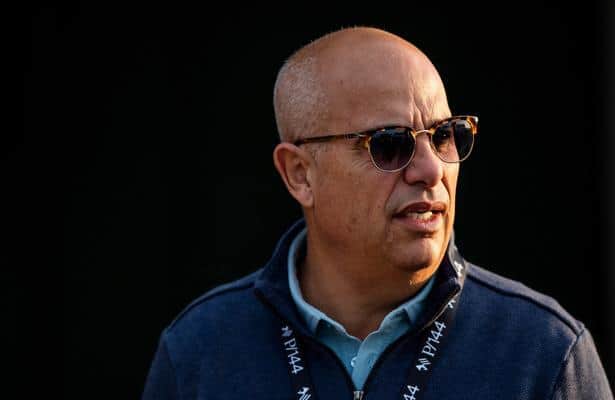 Mark Casse has sent eight horses to the Kentucky Derby during his Hall of Fame training career and has had an entry in the race every year since 2017.

Casse now has several 3-year-olds with Derby potential, including Gretzky The Great, who soon will make a surface change after running sixth in the Breeders’ Cup Juvenile Turf last out.

“The only reason he ever ventured on grass, he is a Canadian-bred,” Casse said about the son of Nyquist. “He went early to Canada and if you’re going to be in Canada, the Summer is always your goal, so we started him on the grass. He ran well on the grass, there was just never any time to take him off of it.”

Casse did not point to a specific race but said he had confidence that Gretzky the Great will be successful with the change.

“The Nyquists have shown they can handle the dirt, so that’s probably what I’ll go with for him,” Casse said.

Besides Gretzky the Great, Casse gave a rundown of some of his other newly minted 3-year-olds.

Laker Mamba— A son of Nyquist out of Disturbingly Hot, by Unbridled’s Song, the colt named after late Los Angeles Lakers superstar Kobe Bryant (nicknamed the Black Mamba) romped to victory his second time out at Churchill Downs on the turf, going 1 1/16 miles. In his most recent race at Gulfstream, a 7 1/2-furlong allowance race, he finished fourth.

“He got away really bad and there wasn’t a whole lot of pace,” Casse said. “He’s just a horse that wants to run forever. We are going to look at running him on the dirt at some point.”

Scarlet Fusion— The son of Curlin out of Scarlet Tango, by French Deputy ran second in a 1 1/16-mile maiden race Saturday at Fair Grounds, being narrowly beaten by Big Lake. Casse spoke highly of the colt before the race.

“He’s a horse that has shown us some ability but just didn’t catch on with racing the first couple times,” Casse said. “His last race (third place going 1 1/8 miles at Churchill Downs on Nov. 28) was a big improvement, and he’s trained well since.”

Dolder Grand— joining Scarlet Fusion in Saturday’s race was the morning line favorite Dolder Grand, who ended up finishing in third place. Casse had considered running the $800,000 colt as a maiden in the Breeders’ Cup but instead opted for a Churchill Downs maiden race a few weeks later, where he finished second.

“We tried him on the dirt at Churchill, and he ran well,” Casse said before Saturday’s race. “... We’ll see. Hopefully he moves up.”

Helium— Already a stakes winner at Woodbine in the Oct. 18 Display Stakes, Helium, who has never raced on dirt, is dealing with an injury. Casse said he hoped the colt, who last worked Dec. 27 at Fair Grounds, can return soon.

“We thought at first that it was a little more severe than what it was,” Casse said. “I brought him back to Ocala to our training center, but he’s doing well. Going to maybe breeze him in the next couple of days.”

Souper Sensational— On the Fillies side, Casse had Souper Sensational running in the Silverbulletday at Fair Grounds on Saturday. As the 1.80-1 second choice, she was crowded along the rail early but stayed on to finish second. Casse praised her before the race.

“She’s one that has generally been a really nice horse,” Casse said.

Palazzi— Another other 3-year-old to look for in the coming months out the Casse barn is Palazzi, who won on the turf at Fair Grounds on Dec. 19 and was spoken of very highly by his trainer.

“He was very impressive in his first start on the grass at Fair Grounds,” Casse said. “So he’s a horse that could be a factor in the 3-year-old grass racing.”

Spanish Loveaffair— The sixth-place finisher in the Breeders’ Cup Juvenile Fillies Turf in her most recent trip could be one to look for, according to Casse.

“She’s back,” Casse said. “She had her first breeze (Wednesday) since the Breeders’ Cup.”

Curlin’s Catch— For Canadian races, Casse said to keep an eye on Curlin’s Catch, who broke her maiden at Gulfstream Park going one mile on the dirt on Jan. 3.