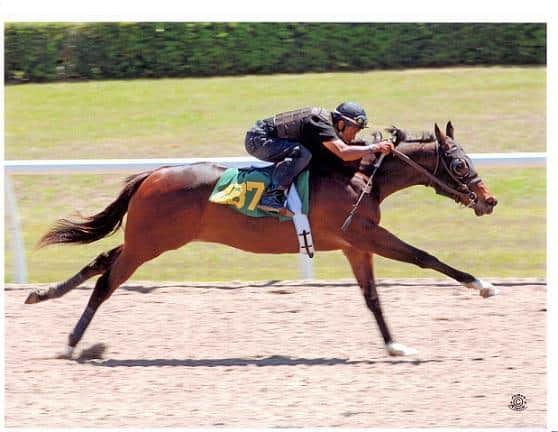 A thoroughbred’s first start is truly beautiful. It is the matrimony of a trainer’s careful planning  with a breeder’s superstition, a groom’s hard work with a breaker’s persistence. Countless people are behind every maiden victory, from before the foal was even born, their hard work riding on the hope that someday their horse might turn out to be something special.

I have kept a careful eye out for some of the best unraced two year olds out there, scouring sales catalogs and works, pedigrees and conformation. Now I have narrowed down my selections to just five juveniles, three colts and two fillies, who I will follow and document from their first race to their retirement. Are you ready?

This full brother to Secret Circle kicks us off. The intact chestnut colt has been firing up the Belmont backstretch with two bullet works in the month of June. The colt is a TrueNicks A+ and it’s not hard to see why. Not only is he beautiful, but he’s put together very well and looks very sound too. Eddington and Dixieland Band make this colt sound like a good middle distance runner with plenty of speed, but don’t forget, his grandsire, Unbridled, did give Carl Nafzger his first Kentucky Derby win.

This beautiful blue roan colt may be Doug O’Neill’s best hope for a hat trick in the Santa Anita Derby. By the recently deceased Pulpit, while his mother may have been a sprinter, his dad had the makings of a horse who could just keep on going. It doesn’t get much better than a TrueNicks A++ and that is what Coolington was rated! He is certainly put together nicely, if you can get past his stunning coat. Check out some of his works on the West Coast, he flies!

While perhaps not the most eloquently named, Gutshot has talent. Firing a 3 furlong bullet his first work, he has a beautiful build. He may not be the soundest of horses with his mother never racing, but he seems to have speed and it wouldn’t be surprising if Hat Trick threw in a little stamina too. TrueNicks only gives his nicking a B+, but it can be seen there were three Group 1 winners based off this cross in Japan, most noticeably Kizuna.

Ever heard of Bodemeister? This is his little sister! The TrueNicks B+ filly has been heating it up over at Santa Anita, working a quarter alone in an eye popping 23.80 second bullet! The bay filly has speed and stamina and it shows up in her pedigree. My only question is how her precocious mom will combine with her later maturing father. Remember, Smart Strike’s best get tend to be fillies.

Cross Traffic is a new name on the scene but his little sister doesn’t look like she’ll be new for long! By sprinter master Indian Charlie out of multiple Grade 1 winner Stop Traffic, Thirteen Arrows looks like she is hitting some targets in the mornings, firing a bullet at Saratoga, the best of 39 other works! TrueNicks gives her a promising A and check this out -- she is bred on a similar cross to Bwana Charlie!