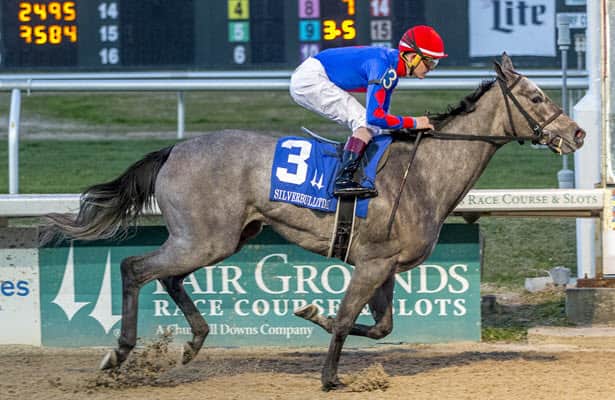 In what was her first try around two turns, Lothenbach Stables’ Charlie’s Penny sat a clear, stalking trip behind pacesetter Littlestitious, rallied on the turn for home, and darted away to an authoritative 3 ¼-length win in Saturday’s $150,000 Silverbulletday Stakes at Fair Grounds, while earning ten points on the road Kentucky Oaks (G1) for trainer Chris Block.

Souper Sensational closed from last to be second (4 Oaks points), with another three-quarters of a length back to longshot Moon Swag (2 Oaks points) in third. Sun Path, the .70-1 favorite, checked in a disappointing fourth (1 Oaks point).

"She was able to get herself in a nice position quickly,” Hernandez said. “Going around the first turn and then once she got outside (Sun Path) she just traveled nicely with her ears up the whole way. I could always tell that she was going to respond when I needed her to and that was the whole key today. She was there for me. I just had to be a good passenger.

"She finished off the race really nicely and she's done that in her races in the past," Hernandez continued. "You go back and watch her race at Churchill (allowance win on Nov. 28) and her last race as well (third in the Letellier Stakes), she finishes off running. Today was the first time around two turns but there was no question for her, she was the best horse."

A two-time winner from four starts coming in, Charlie’s Penny had never traveled further than seven furlongs, and her pedigree (by Race Day out of the Warrior’s Reward mare Sweet Lorraine) might suggest that she should stick to one turn.

"That's kind of what we thought too, that she might just strictly be a sprinter, but this (race) was here (at Fair Grounds) and we thought we'd give the two turns a shot,” Block admitted. “Brian did a fantastic job around the first turn getting her out and settled in there behind what was a slow pace, which I think benefitted us to a degree. In the middle of the turn, I could see that he had a ton of horse. She ranged up there on the outside turning for home, and I've seen her level off really well going short. I thought if she could do that going long, we're going to be ok.”

“We will see how she comes out of this and I would guess that (the Rachel Alexandra on February 13) would be what we would think next,” Block said. “We are here (stabled at Fair Grounds) and she's run well over this surface and around two turns, which was the test today, and that seems like the most logical next spot."

Off a pair of easy wins around one-turn over Woodbine’s synthetic Tapeta surface, Live Oak Plantation’s Souper Sensational had questions of her own to answer. Sent off as the 1.80-1 second-choice, she found herself in a claustrophobic position down along rail early and was shuffled back to last. Swung wide off the turn for home by jockey Declan Carroll, she stayed on nicely to earn the place spot.

“She ran a superb race,” Carroll said. “It got very tight into the first turn and I got squeezed out of there. They crawled around out there today, for these kinds of horses. She ran a huge race once I got out and she came with a really nice run. Unfortunately, the winner was already too far in front of us, but my filly is a very accomplished filly going forward. She took the dirt like a pro and I think she's a serious filly."

Given everything that was thrown at her, Mark Casse’s assistant trainer David Carroll was pleased with Souper Sensational’s effort.

“She broke just OK and then she was kind of in a bad spot,” David Carroll said. “There was no pace, and so you kind of have to ride the race as it comes to you, but she finished up really nicely. Obviously, she handles the dirt no problem, and she should improve off this. She's a very talented filly and I think she'll have a big year."

As the 3-5 favorite, Juddmonte Farms’ homebred Sun Path, a full sister to last year’s Fair Grounds Oaks (G2) winner Bonny South, finished a disappointing fourth. With Florent Geroux in tow, she sat second while chasing the slow fractions set by Littlestitious, but lacked the needed punch in the stretch.

"I got my a** kicked,” Geroux said. “Perfect trip, she was traveling great and when I cut her loose, she just didn't go any faster. I was very surprised. She has been training great."

The three fillies who scratched from the Silverbulletday – Divine Comedy, Minute Waltz and Princess Theorem – were all entered back in a Monday allowance race.