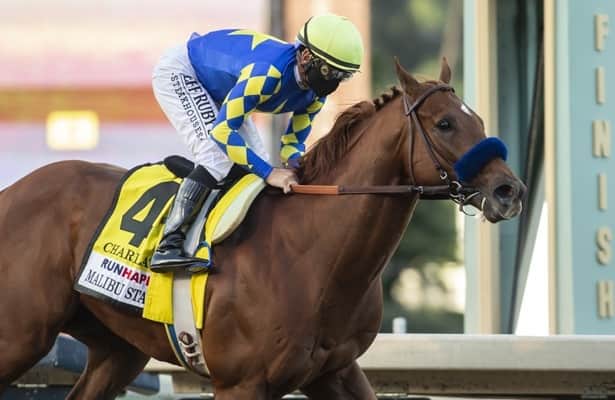 An ankle injury forced Charlatan to miss the 2020 Belmont Stakes and Kentucky Derby. Now a 4-year-old, the Grade 1 winner is targeting stakes on both the 2021 Derby and Belmont cards.

Trainer Bob Baffert has set Charlatan’s next goal as the $500,000 Churchill Downs (G1) going seven furlongs May 1, Jack Wolf of owner Starlight Racing said Saturday. The next target would be the $1 million Metropolitan (G1) going a mile June 5 at Belmont Park.

“Whatever he says, I’m game,” Wolf said. The Starlight co-managing partner spoke Saturday after another of the stable’s standouts, 3-year-old filly Jouster, took the Appalachian Stakes (G2) at Keeneland.

Charlatan sports a 5: 3-1-0 career record with $3.7 million in earnings. His only start of 2021 so far was a second-place effort in February’s Saudi Cup, where he was beaten to the line in the final yards by Mishriff.

“He ran a big race,” Baffert said after the Saudi Cup. “He put away (fellow Grade 1 winner) Knicks Go, just ran him down, turned in a gallant effort and it’s too bad he got beat.”

Charlatan has posted three timed moves at Santa Anita since March 22. In his most recent work, he covered five furlongs Sunday in a minute flat.

Work of the Day from @santaanitapark, Graded Stakes winner Charlatan (Inside) and Leading Score (Outside) worked 5 Furlongs in 1:00.00 on April 4th, 2021, for trainer @BobBaffert. @1stbet pic.twitter.com/gjeJXNG2u2

As a 3-year-old, Charlatan crossed first in all four of his starts, but he was disqualified from an Arkansas Derby (G1) victory because of a medication violation.

An ankle injury kept the Speightstown colt out of the Triple Crown races and Breeders’ Cup. He returned in December to post a commanding win in Santa Anita’s Malibu Stakes (G1).