Charge It dominates with 23-length win in Belmont's Dwyer 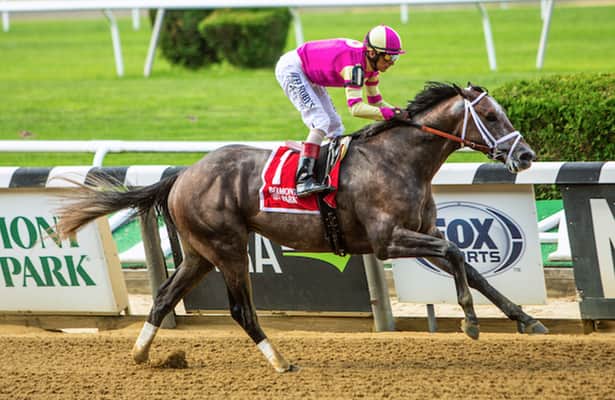 Charge It made amends for his last out 17th-place finish in the Kentucky Derby by posting an authoritative 23-length victory in Saturday’s Grade 3, $250,000 Dwyer Stakes at Belmont Park.

Breaking from the inside post as the 3-5 favorite in the one-mile test for 3-year-olds, Charge It stuck to the rail in the early stages behind pacesetter Fluid Situation through an opening quarter-mile in 22.47 seconds over the fast main track. Further down the backstretch, jockey John Velazquez angled Charge It to the outside of Fluid Situation and came under steady urging as the half-mile was marked in 44.92.

Charge It, a Whisper Hill Farm homebred, took control around the far turn and expanded on his advantage throughout the stretch drive, stopping the clock in 1:34.67. Runninsonofagun secured place honors 2 1/4 lengths ahead of Fluid Situation. Unbridled Bomber, No Sabe Nada and Nabokov completed the order of finish.

#1 Charge it (3/5) destroys the competition and charges home to take the Dwyer (G3) under @ljlmvel for @PletcherRacing.

The Dwyer was a first graded stakes win for Charge It, who was a game second in the Florida Derby (G1) on April 2 at Gulfstream Park en route to the Kentucky Derby. He was a gate-to-wire 8 1/2-length winner at first asking in a one-turn mile Gulfstream maiden special weight in February.

Velazquez, who piloted Charge It for the first time, said getting an outside position into the turn was key.

“He felt great. I tried to do what was best for him and tried to get a position that I thought he was going to do it,” said the Hall of Fame rider. “I had to take the position [approaching the turn] because I knew the horse on the lead wasn’t going to stay there forever. I didn’t want him to put me behind horses that aren’t going to last. So, I got into position and then it was easy.”

The victory topped a four-win day at Belmont for Hall of Fame trainer Todd Pletcher, who captured the Grade 2, $250,000 John A. Nerud with Life Is Good and unveiled maiden winner Capensis, a $2 million yearling sale purchase, in a 1 1/16-mile inner turf test. He closed out the card with a turf allowance win by Jerry the Nipper.

Pletcher said he was hoping for a prominent trip for Charge It.

“We drew the one-hole again and needed to come away and establish some position,” Pletcher said. “We felt like that's where we would be and he would work his way into the clear, and it was pretty much game over from there.”

Following the Kentucky Derby, Charge It underwent a minor surgical procedure for a displaced palate, something Pletcher said made a big difference.

“We always had a lot of confidence in this horse's ability,” Pletcher said. “We tried to correct the problem from the Derby (displaced palate), which we think we successfully did. Today, we saw the talent level that we'd been seeing from him.”

Pletcher indicated that Charge It will now target a summer campaign at Saratoga Race Course with potential starts in the $600,000 Jim Dandy (G2) on July 30 and the $1.25 million Runhappy Travers (G1) on Aug. 27.

He used the same route with 2003 Dwyer winner Strong Hope, who defeated 2003 Belmont Stakes winner Empire Maker in that year’s Jim Dandy ahead of a third-place finish to Ten Most Wanted in the Travers.

“We were hoping for a good performance today that would put us in the position to look at the Jim Dandy or the Travers or both,” said Pletcher, who also won the 2007 Dwyer with Any Given Saturday. “It was a powerful effort today, so we're back on track to where we thought we were at Florida Derby time.”

Hailing from the prominent maternal bloodlines of 2013 Broodmare of the Year Take Charge Lady, Charge It is out of the Indian Charlie mare I’ll Take Charge, a half-sister to Grade 1-winners Take Charge Indy and As Time Goes By, as well as 2013 Travers winner and Champion 3-Year-Old Will Take Charge. The influential family also includes Grade 1-winner Omaha Beach and 2014 Champion 2-Year-Old Filly Take Charge Brandi.

Live racing resumes Sunday at Belmont Park with a nine-race card headlined by the $100,000 Perfect Sting in Race 8. First post is 1 p.m. EDT.