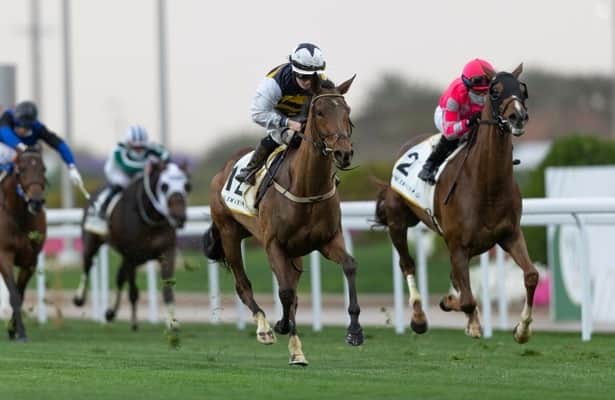 Channel Maker (4-5, 7-1) challenged pacesetter For The Top early, but he and jockey Joel Rosario did not get the lead and control the race as quickly as trainer Bill Mott’s team had wanted.

“He didn’t make the lead like we were hoping,” assistant trainer Neil Poznansky said on the Saudi Cup telecast. “We had to go to Plan B. He ran a good race and made his move. He just got caught at the end there.”

“I thought for a second I was going to get there,” Rosario said. “Then (For The Top) came with a strong run.”

The trip went better for Doyle, the 12th different rider in as many races for the Irish-bred mare by Oscar that has been a winner in Ireland, England, Australia and now Saudi Arabia.

“She jumped smart,” Doyle said. “I just worked my way into position down the rail. She set up beautifully, got the splits at the straight and thundered home.”

The race for was the first for Channel Maker since his close third-place finish to Tarnawa and Magical in the Breeders’ Cup Turf. Poznansky said the plan is still to send the English Channel gelding to next month’s $5 million Dubai Sheema Classic (G1) on the Dubai World Cup undercard.

Rosario was able to get to Saudi Arabia where fellow jockeys John Velazquez and Umberto Rispoli could not because of Saudi authorities’ late changes to their COVID protocols. But it was still tough travel.

“I got into Riyadh at 1 in the morning,” Rosario said. “Everything was fine. I’m glad I made it here.”

Saturday’s races were preceded by heavy rain on a breezy, 59-degree day at the King Abdulaziz Equestrian Field, leaving the turf course listed as good. The dirt course on which the $20 million feature is scheduled for 12:40 p.m. EST was still shown as fast.
Channel Maker Neom Turf Cup Neom Turf Cup (2021)