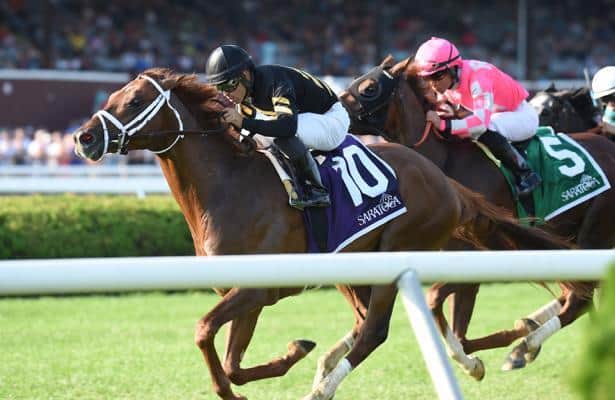 Calumet Farm homebred Channel Cat and his trainer, Jack Sisterson, are no strangers to springing upsets in graded stakes. The duo will look to add another exclamation mark to their collective ledgers in Saturday’s Grade 2, $250,000 Bowling Green, an 11-furlong inner-turf test for older horses, at Saratoga Race Course.

Channel Cat, who is one of three sons of English Channel entered for Saturday’s 63rd renewal, captured the 2019 Bowling Green at odds of 13-1 for former conditioner Todd Pletcher. The 6-year-old chestnut, who was transferred to Sisterson’s care last year, won a dramatic renewal of the Grade 1 Man o’ War in May at Belmont Park at 8-1 by a nose over Gufo, who was a neck better than Bowling Green-rival Moon Over Miami.

John Velazquez, who has also enjoyed surprise success in the Bowling Green, is tied with fellow Hall of Fame riders Javier Castellano, Jerry Bailey, and Jorge Velasquez for most Bowling Green wins with three. He will look to secure the standalone record victory from the inside post after scores with Turk Passer [1994, 31-1], Cetewayo [1998, 9-1], and Air Support [2012, 7-5].

Channel Cat has posted a trio of recent works at Saratoga, including a half-mile effort in 48.66 seconds Saturday on the Oklahoma training turf.

“He couldn’t be doing any better,” Sisterson said. “He’s done all his works within himself. On Saturday, John Velazquez worked him and was very happy with him. The key to Channel Cat is keeping him happy and he seems to be going into the race in great shape and happy form. We look forward to a fun summer with him.”

Channel Cat, who has competed over good turf in his last three outings, ran second in the 12-furlong Grade 2 Elkhorn at Keeneland in April ahead of his Man o’ War score.

Last out, in the 10-furlong Manhattan (G1) on June 5 at Belmont, Channel Cat pressed the pace and faded to seventh in a race won by Domestic Spending. The second and third-place finishers exited that event to win stakes, including a Grade 1 United Nations coup for the Chad Brown-trained Tribhuvan and a Grand Couturier-score for the Christophe Clement-conditioned Gufo.

“I ran him back in three weeks after the Elkhorn because he was doing so well. I probably should have skipped the Manhattan because he had a tough race in the Man o’ War, but we gave him a little break now prior to the Bowling Green,” Sisterson said. “It was good to see Chad Brown’s horse come back and win the United Nations so the form held up well.”

Bill Mott, who is tied with fellow Hall of Famer Todd Pletcher for most Bowling Green victories with four, will saddle a trio of contenders, including the reigning champion turf male Channel Maker, graded-stakes winner Red Knight and multiple graded-stakes placed Moon Over Miami.

The prominent chestnut, last seen finishing eighth in the Group 1 Dubai Sheema Classic at Meydan in March, will make his fourth-consecutive Bowling Green appearance, including a dead-heat win in 2018, a fourth in 2019 and a third a year ago.

Channel Maker captured the 12-furlong Grade 1 Sword Dancer here last summer over soft going ahead of a similar front-running score in the Grade 1 Turf Classic Invitational in October over firm Belmont turf. Manny Franco, aboard for both of those victories, returns to the irons from post 5.

Trinity Farm homebred Red Knight, a 7-year-old New York-bred son of Pure Prize, made the grade in October in the Grade 3 Sycamore at Keeneland. The consistent chestnut sports a ledger of 25-8-8-1 and will look for his first win of the season, adding blinkers from post 6 under Tyler Gaffalione.

Summer Wind Equine’s Moon Over Miami, a 4-year-old Malibu Moon colt, captured the 1 5/16-mile Dueling Grounds Derby in September at Kentucky Downs to secure his only stakes win. He has made all three starts this year in graded company, finishing third in the Grade 2 Mac Diarmida in February and second in the Grade 2 Pan American, both at Gulfstream, ahead of his last-out third in the Grade 1 Man o’ War.

Pletcher will saddle Donegal Racing’s Shamrocket, a 4-year-old Tonalist bay in search of his first graded win. The normally late-running colt, who finished fourth in the Grade 1 Man o’ War in May, utilized a more prominent approach last out when third in the Grand Couturier.

Trained by Mike Maker, Cross Border has thrived on the Saratoga turf with five wins and one second from six starts. Last year’s efforts at Saratoga included a win in the Lubash and a runner-up finish in the Grade 1 Sword Dancer. In 2019, Cross Border went 3-for-3 in a perfect Spa summer campaign.

Bred in the Empire State by Berkshire Stud and B.D. Gibbs, Cross Border will exit post 2 under Luis Saez in search of his first win this year.

Brown, a four-time Eclipse Award-winning trainer, combined previously with Hall of Fame rider Castellano to capture the Bowling Green with Hyper [2013] and Flintshire [2016].

The 4-year-old Constitution colt broke slow en route to a fourth-place finish last out in his North American debut in a nine-furlong optional-claiming event on June 27 on the Belmont turf.