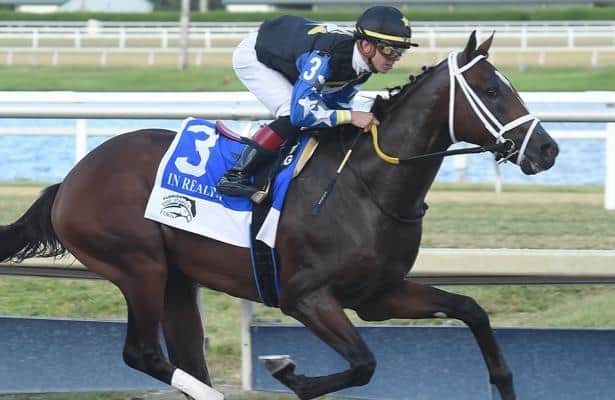 The highly promising Florida Sire Stakes hero breezed a half-mile in 46.12 seconds over a ‘good’ track to be credited with the fastest of 112 workouts recorded at the four-furlong distance Saturday.

“He had a good work, sat off another horse, finished up well and galloped out strong,” trainer Saffie Joseph Jr. said. “Tyler Gaffalione was aboard. We’re happy with where we’re at. He came back good, scoped good. We’re ready to go.”

The Mucho Macho Man, a one-mile stakes for newly turned 3-year-olds, will be one of four stakes for sophomores on Saturday’s card. It also kicks off Gulfstream’s highly productive program for 3-year-olds that will culminate with the running of the $1 million Florida Derby (G1) March 28.

Chance It, who finished second in his June 1 debut, bounced back to offer a brilliant 9 ¼-length triumph at Gulfstream June 29. The Florida-bred colt won the 5 ½-furlong maiden special weight race at Gulfstream in 1:03.95 while being wrapped up in the stretch, earning the fastest speed figure in the country produced by 2-year-old at the time and one that he matched in the Dr. Fager.

Joseph said he couldn’t be happier with Chance It’s physical appearance as he nears his 3-year-old debut.

“He looks really good in the flesh," the trainer said. "He has a really good coat. The colder weather has helped him a lot. He’s really enjoying the cooler weather.”

Chance It will likely receive a strong test in the Mucho Macho Man, which will also mark the return of Stonehedge LLC’s Smash Factor, who debuted with a victory over Chance It in June. The gelded son of Khozan went on to finish second to Chance It in the In Reality and, most recently, finished second in the Nov .8 Juvenile Sprint for Florida- bred freshman at Gulfstream Park West.

Also expected to enter are Screen Door Stables LLC’s As Seen On Tv, who defeated Smash Factor in the Juvenile Sprint; Sagamore Farm LLC’s South Bend, the Street Sense Stakes winner who finished sixth in the Kentucky Jockey Club (G2) at Churchill last time out; Andie Biancone and Limelight Table Corp.’s Sole Volante, an undefeated gelding who won the Pulpit on turf last time out; Shadwell Stable’s Ashaar, an impressive debut winner who returned to finish fifth in the Nashua (G3) at Aqueduct last time out; and Santa Rosa Racing Stables’ Inter Miami, who debuted with an 8 ½-length victory Dec. 4.