Chance It gears up for Mucho Macho Man; Math Wizard to the Pegasus? 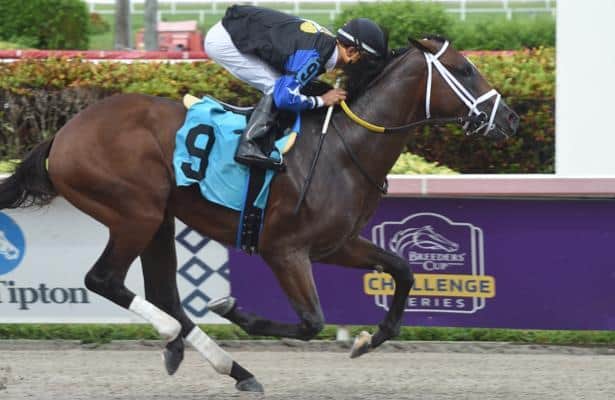 Shooting Star Thoroughbreds LLC’s Chance It tuned up for a scheduled start in the $100,000 Mucho Macho Man Stakes on Jan. 4 with a sizzling five-furlong local workout Sunday morning in Hallandale Beach, Fla.

The juvenile son of Currency Swap breezed five furlongs in 58.73 seconds, the fastest of 48 recorded at the distance, while preparing to make his 3-year-old debut in the one-mile event that will kick off Gulfstream’s stakes program for 3-year-olds.

“He worked really good. It was a strong work for the Mucho Macho Man, trainer Saffie Joseph Jr. said. “I’m very happy with where we are right now.”

Chance It has been idle since capturing the $400,000 In Reality, the 2019 Florida Sire Stakes series final Sept. 28, scoring by more than seven lengths in his first attempt around two turns.

Math Wizard, a possible for the Jan. 25 Pegasus World Cup Invitational (G1) at Gulfstream, breezed for the first time since finishing fifth in the Breeders’ Cup Classic at Santa Anita Nov. 2. The Pennsylvania Derby (G1) winner went in 36.21 seconds.

Undefeated Tonalist’s Shape, who captured the Hut Hut Stakes last time out, was timed in 35.47 seconds as she gears up to hit the Kentucky Oaks trail.

Sunday afternoon, Joseph visited the winner’s circle following Merseyside’s front-running score in Race 1, a five-furlong maiden race for 2-year-old fillies that was originally scheduled to be run on turf.

“We always wanted to try her on dirt, but today I was pushing not to run her on dirt. The owner said let’s give it a try,” Joseph said.

The 2-year-old daughter of McLean’s Music ($16.20), who finished third and fourth on turf in her first two starts, shook off a challenge by favored Feeling Funny, a daughter of American Pharoah, and drew off to win by five lengths under Emisael Jaramillo.