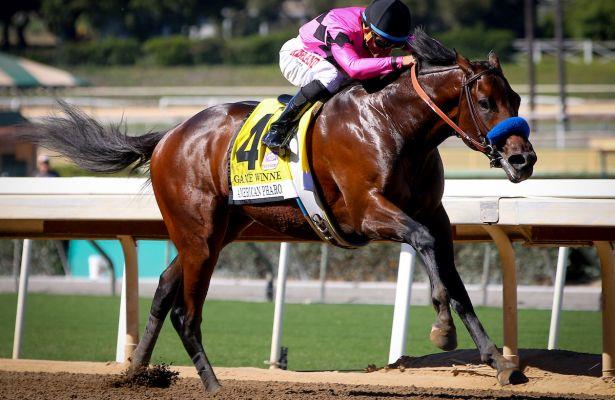 Game Winner, undefeated champion 2-year-old male of 2018 and graded-stakes winner at 3, has been retired from racing and will stand the 2021 season at Lane’s End.

As a 3-year-old, Game Winner ran a terrific race in the Grade 1 Kentucky Derby finishing fifth beaten by just over three lengths. That same year, his graded stakes performances featured second-place finishes in the Grade 2 Rebel Stakes and Grade 1 Santa Anita Derby. He was most recently seen winning the 2019 Los Alamitos Derby (G3).

“As a 2-year-old he was just phenomenal, he really brought it to that championship level,” said Bob Baffert. “To do what he did really showed that he was the best of the best. Candy Ride was a brilliant racehorse and he throws brilliance, and with Game Winner, the minute he showed that brilliance I knew we had something special.”

Game Winner broke his maiden at first asking at Del Mar, dominating the field by 5 ¾ lengths. This dominating performance gave his connections the confidence to target the Grade 1 Del Mar Futurity just 16 days later. The win would become the first of three Grade 1 victories as a 2-year-old, as he later took the Grade 1 American Pharoah Stakes posting a 97 Beyer and the Grade 1 Breeders’ Cup Juvenile by almost three lengths.

After an unbeaten 2-year-old season that included three Grade 1 victories, he was rightly crowned Champion Two-Year-Old Colt. In doing so, Game Winner joined an elite list of just three colts to win three or more North American Grade 1 races as a two-year-old in the past 20 years.

“Champion 2-year-olds make great sires,” said Bill Farish. “Street Sense, Uncle Mo, American Pharoah, and now Nyquist looks very promising. All were the very best of their generation and now are among the elite stallions in America. Game Winner dominated in his championship year and was a graded-stakes winner at three. He is a champion from the immediate family of a champion, so we are honored that Gary and Mary West have entrusted Lane’s End with his stallion career. “

Game Winner started his 3-year-old career with back-to-back second-place finishes in the Grade 2 Rebel Stakes, beaten by a nose by Omaha Beach, and the Grade 1 Santa Anita Derby. His next start came in the Grade 1 Kentucky Derby where he was a fast-finishing fifth after getting knocked hard out of the gates and being as far back as seventeenth at the halfway point of the race. He finished just over three lengths behind the winner and earned the highest Thorograph figure of .25 of the field. His final three-year-old start was a dominating five-length win in the Grade 3 Los Alamitos Derby.

“Mary and I have been excited about Game Winner since the day Ben Glass bought him for us at Keeneland,” said Gary West. “These special horses are so hard to come by and to have a Champion means everything to us. I am so pleased he will stand at Lane’s End and I plan on supporting him extensively as I have with my other stallions, alongside the superior group of shareholders they have put together. This includes Alpha Delta, Summer Wind Farm, SF Bloodstock, Mt. Brilliant Farm, Sea Horse Breeders, West Point and St. Elias. They are among the best breeders in America and undoubtedly will support him and contribute greatly to his chances to be a successful stallion.”

Bred in Kentucky by Summer Wind Farm, Game Winner is out of the A.P. Indy mare Indyan Giving who has also produced graded-stakes winner Flagstaff. His second dam is Champion Fleet Indian who won five graded stakes and earned over $1 million. To date, his sire Candy Ride has produced 16 grade 1 winners and is the fourth leading active sire by lifetime earnings.

Game Winner will be available for inspection in the coming weeks and a stud fee will be determined.