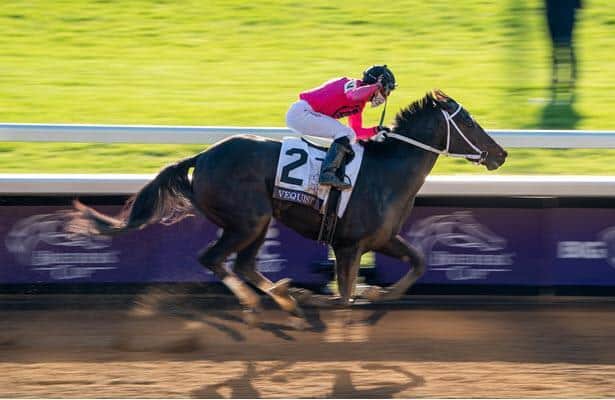 Named for Calumet Farm’s champion 3-year-old filly of 1979 that was elected into the Hall of Fame in 1985, the Davona Dale is Gulfstream’s next stop for sophomore females toward the $200,000 Gulfstream Park Oaks (G2) March 27. Last year’s Oaks winner, Swiss Skydiver, went on to beat males in the Preakness (G1) and be named 3-year-old filly champion.

Vequist, the 7-5 favorite in the Davona Dale, is the latest in a family of champions. Her sire, Nyquist, was named North America’s top juvenile male in 2015 and followed up by winning the Florida Derby and Kentucky Derby (G1) in 2016. Vequist’s grandsire, Mineshaft, earned 2003 Eclipse Awards for older male and Horse of the Year.

Her title was the first for her trainer, Parx-based veteran Robert E. ‘Butch’ Reid Jr., approaching his 800th victory in a career that began in 1985. He and his wife and assistant, Ginny, have been overseeing Vequist’s preparation at Palm Meadows, Gulfstream’s satellite training facility in Palm Beach County.

“It was a box that I was never sure that I would check, training a champion, so it was nice to get that accomplished,” Reid said. “She’s doing really well. We’re very happy with her. She’s acclimated to the weather down here. We’ve been down here a couple of months already, so we’ve taken our time and so far, so good.”

Vequist will be cutting back for her first race since a two-length victory in the 1 1/16-mile Breeders’ Cup Juvenile Fillies (G1) Nov. 6 at Keeneland, a span of 114 days. She has breezed every other week since mid-January for her return, most recently going five furlongs in 59.65 seconds Feb. 13, second-fastest of 30 horses.

“I expect her to run well,” Reid said. “We don’t have the screws completely tightened for this one but it should be a nice stepping-stone with some big races down the line in mind.”

Following the Breeders’ Cup, the connections gave Vequist a breather at noted horseman Dr. Barry Esiaman’s farm near Ocala, Fla. before she returned to Reid to begin preparations for her 2021 campaign.

“After the Breeders’ Cup we wanted to get three starts in her and have the [Kentucky] Oaks be her third start of the year. This just fit well,” Reid said. “It’s a one-turn mile, a little bit of a turnback, but we didn’t want to go back any further than that. We didn’t have to train her too hard for this one, and she’s coming up to it well.”

Vequist made her career debut last July for Swilcan’s Tom McGrath, running second by a nose after chasing the winner, fellow first-time starter Niente, from the gate in a 4 ½-furlong maiden special weight at Parx. Barber and Adam Wachtel saw enough to buy into the promising filly, who romped by 9 ½ lengths in the historic Spinaway (G1) at Saratoga in just her second start.

From there, Vequist was stretched out to a mile for the Frizette (G1) at Belmont Park, where she wound up two lengths behind Dayoutoftheoffice, another finalist for the 2-year-old filly Eclipse, and 10 ¼ lengths ahead of everyone else. Overlooked as the fourth choice in a field of seven for the Breeders’ Cup, Vequist got an inside trip at Keeneland never far from the lead and found enough room to kick clear late.

“It was a sensational year. It all happened so quick. One day we were in a maiden race at Parx and the next thing we knew we were winning a Grade 1 at Saratoga,” Reid said. “It was all a bit of a blur but, in the end, it was very satisfying to be there with my family and everything.”

Reid said he has noticed a growth in Vequist, both physically and mentally, in her time since the Breeders’ Cup. Riding for the first time is two-time defending Eclipse Award-winning jockey Irad Ortiz Jr. from Post 3 at topweight of 123 pounds.

“Definitely, physically you can see it. She’s bigger and she’s filled out nicely since her 2-year-old campaign,” Reid said. “She always had a good head on her shoulders, so she didn’t have too much to jump forward there. She’s just a smart filly and doesn’t worry about too much so we’re excited to get this first one under our belt.

“We’re taking it one start at a time and we’ll re-evaluate after this first start and make our plan from here,” he added. “There’s a lot of exciting races on the horizon.”

Breeze Easy’s Ontario-bred stakes winner Curlin’s Catch will be among the horses looking to spoil Vequist’s season debut. Trained by Hall of Famer Mark Casse, the bay daughter of two-time Horse of the Year and 2014 Hall of Famer Curlin made her first two starts last fall on the all-weather surface at Woodbine before getting time off.

Casse moved Curlin’s Catch to the dirt for her sophomore opener Jan. 3 going a mile at Gulfstream, and she responded with a front-running 2 ¾-length triumph over next-out winner Tabor Hall. She stretched out for the Suncoast Stakes Feb. 6 at Tampa Bay Downs, rating just off the pace before splitting horses and sprinting clear to a 4 ½-length victory. She is 8-1 on the morning line.

“In the last race we had actually planned on being a little closer, but it didn’t work out that way and it was fine. She handled it well,” Casse said. “We aren’t going to be very far off of it. We are cutting back from the mile and 40 yards and two turns to one turn, so that’s a little different. But she’s not going to be far back.

“She’s two-for-two on the dirt and definitely headed in the right direction,” he added. “This will be a true test on Saturday, [to see] where she fits in with the 3-year-old filly gang.”

Jose Ortiz has the call aboard Curlin’s Catch from Post 4.

Another daughter of Curlin, Juddmonte Farms, Inc.’s homebred Millefeuille, is entered to make her sophomore debut for Hall of Fame trainer Bill Mott. The bay filly broke her maiden second time out going a mile last October at Belmont Park, and was beaten less than a length when second in the 1 1/8-mile Demoiselle (G2) Dec. 5 at Aqueduct. Hall of Famer John Velazquez gets the assignment from Post 5.

Like Vequist, Phoenix Thoroughbreds III’s Crazy Beautiful also exits the Breeders’ Cup Juvenile Fillies, where she ran sixth following runner-up finishes in the Alcibiades (G1) and Pocahontas (G3). Winner of the Ellis Park Debutante last summer, she will be making her Gulfstream debut for Ken McPeek, the trainer of Swiss Skydiver. Robby Albarado rides from Post 6.

John Michello’s Competitive Speed looks to rebound off a disappointing sixth, though beaten just 4 ½ lengths after some early traffic trouble, in the seven-furlong Forward Gal (G3) Jan. 30 at Gulfstream. She had won each of her previous three starts, including the 6 ½-furlong Glitter Woman Jan. 2 to open her sophomore season. Leonel Reyes has the call from Post 7.

Also entered are Adios Trippi, winner of the seven-furlong Gasparilla Jan. 16; Lady Traveler, Wholebodemeister and Three Tipsy Chix, respectively second, third and seventh in the Forward Gal; Happy Constitution, third in the seven-furlong Our Dear Peggy last fall at Gulfstream; Pens Street, a maiden winner last fall at Gulfstream who ran second in a Feb. 4 optional claiming allowance in her only two starts; and Hindsight.

*Rating is based on HRN fan votes, which rank the Top Active Horses in training.
Vequist Davona Dale Davona Dale (2021)