Champion Swiss Skydiver back with a bang in G1 Beholder 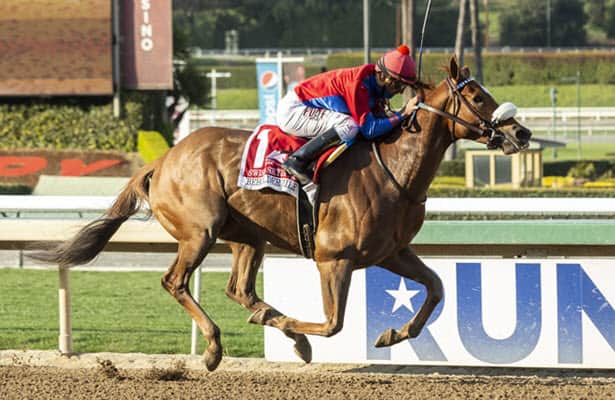 Ridden by Robby Albarado, the 4-year-old filly by Daredevil got the distance in 1:36.18 as she cruised to the wire with her ears pricked.

With Bob Baffert’s Golden Principal hustled to the lead from her number two post position, Swiss Skydiver, breaking from the rail, was attentive to the pace while fourth, just 2 1/2 length off the lead around the Club House turn. Third at the rail, two lengths off of Golden Principal mid-way around the turn, Swiss Skydiver angled three-wide turning for home and surged to the lead approaching the furlong pole as she went on to a very impressive win.

“Being on the inside, circumstances dictate that you need to get away clean to get some kind of a forward position,” said Albarado, who has now ridden her in her last three races, including a sensational neck victory over eventual Horse of the Year Authentic in the Grade 1 Preakness Stakes Oct. 3.  “I knew we had speed in the race but if I could get her in position, get her to clip off twelves every eighth (of a mile), she comes home pretty fast.

“Pretty much up the backside, every point I felt like she was right there with me the whole way.  She was taking deep breaths around there.  When I finally gave her some room there she took off.  It was all her, I was just a passenger…I look forward for the rest of the year with her.”

“Yes, she met expectations, but you never know,” said McPeek, who has been at Santa Anita since Swiss Skydiver shipped in from her Gulfstream Park base on Tuesday. “The distance for me was a little bit of a worry because of the run to the first turn. But Robby does know her so well, to get her in 12s, just get her into a nice rhythm and let her make her run.  You can’t force anything with her, and if you go too fast early, she will wilt a little bit."

“She cruises through everything, even when she gallops," McPeek continued. "The feed tub’s the biggest deal with her.  I’ve never had a horse, colt or filly, eat like she does.  It just makes my job so much easier.”

Ridden by Mike Smith, As Time Goes By rallied five-wide turning for home and bested her stablemate Golden Principal by 1 3/4 lengths while never threatening the winner. The second choice in the wagering at 9-5, As Time Goes By paid $3.40 and $2.80.