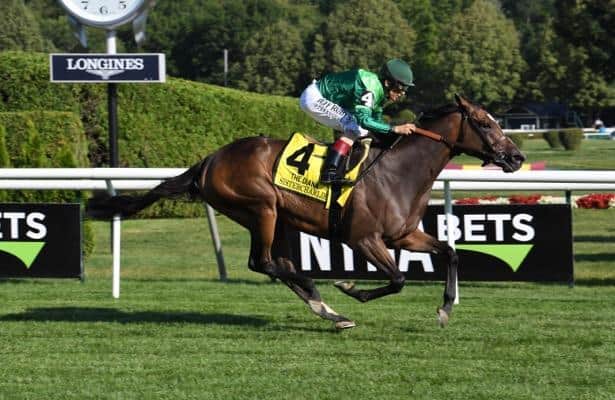 Last year’s Champion Turf Female Sistercharlie returned to competition in the Grade 1, $500,000 Diana after an eight-month layoff and she didn’t miss a beat.

The list of achievements for Sistercharlie and her trainer are piling up. She extended her consecutive victories to four, extending back to last year.

Sistercharlie joined an elite club of horses to win the Diana two years in a row. While Brown took down his fourth Diana in a row and his fifth overall.

Sistercharlie’s 2019 debut was delayed because got sick earlier in the year but that didn’t stop her from returning in top form.

"Another great performance from a great mare,” Brown said. “She showed why she's the best. (Owner) Peter (Brant) made the decision to come back and race her another year. He's a great sportsman and he loves seeing this horse run.

"We were going to start her campaign a little earlier in the year, and she got sick on us. We had to wait and he was very patient. She just hit all her works right leading up to this race.”

Stablemate Thais was in the race to ensure that there would be a fast pace for the other Brown runners. Thais achieved that goal when she and the Bill Mott runner Mitchell Road rattled off early fractions of 22.10, 45.90, and 1:11.51.

Final time for the Diana, which was run on the inner turf course rated good, was 1:47.93 for the nine-furlongs.

Once the pace collapsed, it was Rushing Fall who was closest to the front and she briefly held the lead until Sistercharlie made her move and grabbed the lead.

Homerique had to rally from the back of the pack but had too much work to do against the other Brown turf stars and ended up in third just a neck behind Rushing Fall.

Hall of Fame rider John Velazquez got an ideal trip with Sistercharlie.

"She normally breaks slow. I made sure to get her a nice position passing the wire for the first time, making sure that the other horse didn't put me in behind her,” Velazquez said. “(Rushing Fall) was the one to beat in my eyes and once I was behind him and relaxed where I thought was in a good position, I bided my time a little bit.

"By the 3/8 pole, it was time to go, and I know she takes a bit to get going, so I'd rather go wide and get her going than to stay behind the other horses and not get there. It was a great effort by her.”

As was expected the three fillies from the Brown barn dominated the race.

In the end, Velazquez summed up Brown’s training job with Sistercharlie, "Chad told me that she was ready and you have to give it to Chad. He did a great job with her. He passed the race at Belmont and said, 'Don't worry, I'll get her ready for the Diana.'

"It worked out perfect. She came back very well and they did a great job with her. She was there for me."