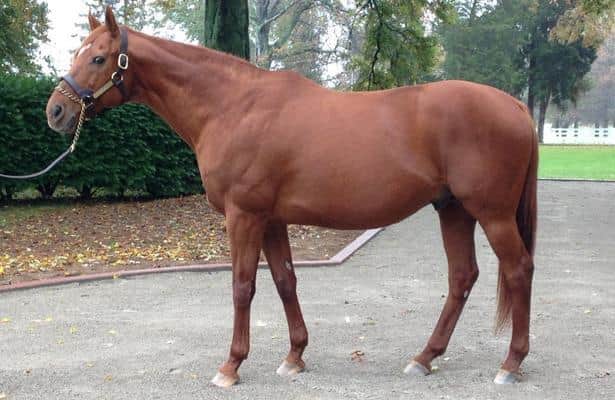 Thoroughbred champion Point Given has been retired from stud duty at Calumet Farm and is set to join the Kentucky Horse Park's Hall of Champions in the spring of 2018, becoming the fifth Horse of the Year to occupy the famous barn.

The 19-year-old son of Thunder Gulch won six Grade 1 races, including two legs of the 2001 Triple Crown, the Preakness and Belmont Stakes. For his efforts, he received Eclipse Awards as Horse of the Year and Champion 3-Year-Old Colt.

“We are so pleased to welcome this handsome and impressive chestnut stallion to the Hall of Champions, and we thank his connections for entrusting him to our care,” said Kentucky Horse Park Executive Director Laura Prewitt. “We believe he will serve as an excellent ambassador to his breed and the sport of racing for the hundreds of thousands of visitors to the park each year.”

Point Given, affectionately known as the “Big Red Train” due to his 17.1-hand height, earned $3,968,500 with nine wins and three second-place finishes from 13 starts. He was the first horse in history to win four $1 million races in a row, which included the Preakness, the Belmont, the Haskell Invitational Handicap, and the Travers Stakes. He was inducted into the National Museum of Racing and Hall of Fame in 2010.

Point Given retired from racing in September 2001 to stand at Three Chimneys Farm in Midway, Ky. In 2013, he was relocated to Calumet Farm in Lexington, Ky., where he has stood the past five seasons. He is the sire of two champions, 15 graded stakes winners, and 32 stakes winners in both the Northern and Southern Hemisphere, for total progeny earnings of more than $27.1 million. His leading runners include Canadian Horse of the Year Sealy Hill and Canadian champion Points of Grace, plus Grade I winners Go Between, Coil, and Point Ashley.

Point Given will be available for viewing in April 2018, coinciding with the opening and 40th anniversary season of the park. Information about the park and our full schedule of activities is available at KyHorsePark.com.