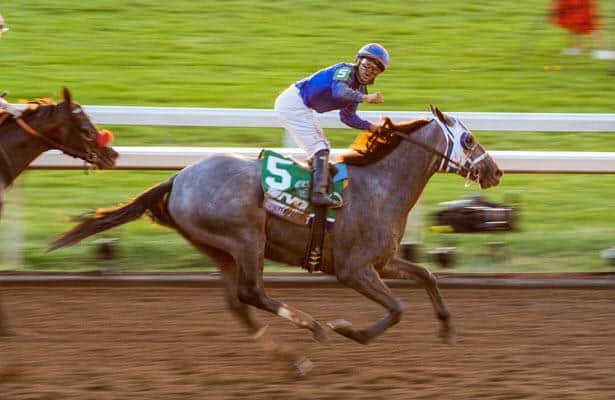 Champion 2-year-old male Essential Quality drew the rail and will take on six rivals when he makes his seasonal bow in Saturday’s Grade 3, $750,000 Southwest Stakes at Oaklawn Park. Contested at 1 1/16-miles, the Southwest awards Kentucky Derby qualifying points to the top-four finishers on a 10-4-2-1 scale.

Godolphin’s Essential Quality was a perfect 3-for-3 last year with wins in the Breeders’ Futurity (G1) and Breeders’ Cup Juvenile to earn the Eclipse Award as outstanding 2-year-old male for trainer Brad Cox. Fortuitously, Essential Quality has been stabled at Fair Grounds this winter where the weather has not forced any breaks in training. As a result, the son of Tapit has managed a steady work tab dating to late December, which includes a five-furlong drill in 1:00.4 this past Saturday.

Luis Saez, who was aboard in both Breeders’ Futurity and Breeders’ Cup Juvenile, again has the mount on Essential Quality in the Southwest.

Jackie’s Warrior will also be making his first start since the Breeders’ Cup Juvenile, where he checked in fourth for Hall of Fame trainer Steve Asmussen. The son of Maclean’s Music racked up Grade 1 wins in last year’s Hopeful at Saratoga and the Champagne at Belmont Park. He drew post No. 4 and will have regular rider Joel Rosario in the irons.

Spielberg comes east for Baffert following a distant fourth-place finish in the Robert B. Lewis (G3) at Santa Anita Park in his sophomore bow. Previously, he won the Los Alamitos Futurity (G2) in December to close out his 2-year-old campaign. Spielberg drew the outside stall and will have Martin Garcia aboard for the first time.

Asmussen also entered Saffa’s Day. The son of Carpe Diem was DQ’d from a debut maiden at Keeneland last October and subsequently finished off the board in the Nyquist Stakes at Keeneland on Breeders’ Cup Friday and fourth in the Dec. 18 Springboard Mile at Remington Park. Saffa’s Day returned to maiden company on Jan. 22 at Oaklawn Park and prevailed by a nose after dueling on the lead throughout. He drew post No. 2 and Ricardo Santana Jr. will ride.

Calumet Farm’s Santa Cruiser will wheel back two weeks after finishing a distant seventh in the Feb. 13 Risen Star (G2) at Fair Grounds. Prior to that, he earned his diploma at Churchill Downs in the fall and was fourth in the Jan. 16 Lecomte (G3) at Fair Grounds.