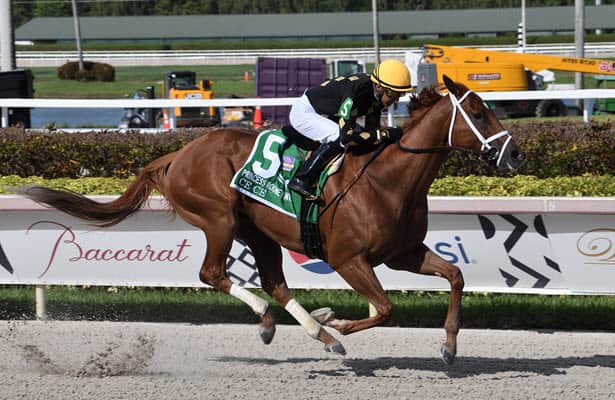 The seven-furlong Princess Rooney, a seven-furlong event named in tribute to the 1984 Breeders’ Cup Distaff winner and Eclipse Award champion older mare, headlined Saturday’s Summit of Speed program that also featured the $100,000 Smile Sprint (G3), a six-furlong race for 3-year-olds and up.

The Michael McCarthy-trained daughter of Elusive Quality captured the Princess Rooney by 3 1/4 lengths last year before going on to win the Breeders’ Cup Filly & Mare Sprint at Del Mar to clinch to the Eclipse Award as champion female sprinter.

“I just don’t have enough superlatives and good things to say about her,” said McCarthy, who watched the Princess Rooney in his Southern California living room before heading to Santa Anita. “She’s very special.”

Ce Ce’s encore performance may well have topped her first visit to Gulfstream Park, scoring by 6 1/2 lengths as the 2-5 favorite.

Meanwhile, Ce Ce responded when asked for her run by Hall of Fame jockey Victor Espinoza, sweeping three wide into the stretch and drawing clear with a commanding outside drive.

“I got kind of lucky the outside horse cleared us and I just stocked the leaders. I didn’t want to stay too far back today. I wanted to be close to the pace,” Espinoza said. “I didn’t want them to sneak away from me, but at the three-eighths I asked her to go and she went on.”

Ce Ce ran seven furlongs in 1:22.20 to collect her 10th career victory and pushing her career earning over $2.275 million.

“I told Victor to just bounce on out of there. I wasn’t sure what the filly outside of us was going to do. When she ended up catching a flyer out of there, Victor was content to just let her go and sit outside the speed,” McCarthy said. “She did what I expected her to do. Obviously, it’s never convenient when you ship all the way across the country, but it’s a racetrack that she’s fond of. The spacing of the race was great.”

Ralph Nicks-trained Spirit Wind, a 3-year-old filly who had won her three starts this year at Gulfstream Park by a combined 23 lengths, finishes second, 1 ¼ lengths ahead of third-place finisher Make Mischief.

Ce Ce has spent the week bedded down in Ralph Nicks’ Gulfstream Park barn, just as she did last year.

For McCarthy, Ce Ce’s triumph continued his good fortune at Gulfstream Park, where he saddled City of Light for a victory in the $9 million Pegasus World Cup Invitational (G1) in 2019. The former Todd Pletcher assistant reported that plans for Ce Ce’s next start are undecided.

“We’ll play it by ear, but we might follow the same program we followed last year,” said McCarthy, whose champion mare went on last year to run in the Ballerina (G1) at Saratoga, and the Chillingsworth (G2) at Santa Anita before rolling to victory in the Breeders’ Cup Filly & Mare Sprint.