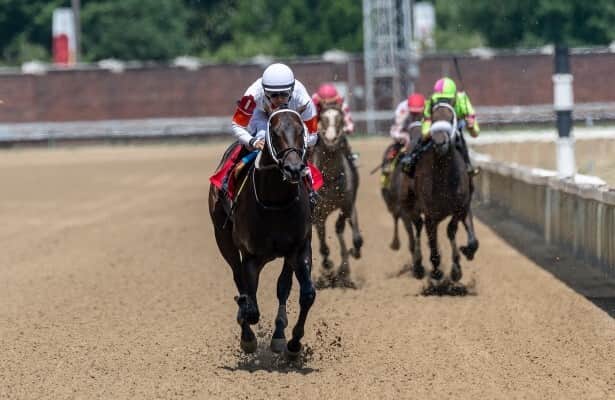 Aside from the $500,000 purse, the Grade 1 Champagne on Saturday at Belmont at the Big A serves as a “win and you’re in” qualifier for the Breeders’ Cup Juvenile and the second official points race for Kentucky Derby 2023, this season offering points to the top five finishers (10-4-3-2-1).

Get Paddock Prince picks for Belmont at Aqueduct

Click here for Belmont at Aqueduct entries and results

Here is a full-field analysis for the Champagne with the track’s morning-line odds. The Champagne is scheduled for Saturday at 5:45 p.m. EDT as race 10 of 11 on an Aqueduct card that has four graded stakes.

1. Andiamo a Firenze (6-1 – Speightstown – Kelly Breen / Jose Lezcano – 3: 2-1-0 - $172,250) Andiamo a Firenze is a three-quarter brother to multiple graded-stakes winner Firenze Fire, who won his only Grade 1 race in the 2017 Champagne. This New York-bred won both of his races on wet, sealed tracks against state-breds on the front end, with his maiden victory at Belmont Park in June and the Funny Cide at Saratoga in August. Andiamo a Firenze was third in the Sanford (G3) between his two wins. Faces strong open company again.

2. Top Recruit (5-1 – Midshipman – Michael Maker / Irad Ortiz Jr. – 3: 2-0-1 - $155,840) Top Recruit broke his maiden at Churchill Downs in June with a front-end effort at odds of 4-1. Trainer Mike Maker sent him to Prairie Meadows, where he finished third behind the unbeaten speedy Tyler’s Tribe when he could not get to the early lead. Top Recruit bounced back to win the Juvenile at Ellis Park, where he beat Curly Jack who then won the Iroquois (G3). Win contender.

5. Blazing Sevens (8-1 – Good Magic – Chad Brown / Flavien Prat – 2: 1-0-1 - $93,750) The third-place finisher in the Hopeful (G1), Blazing Sevens was sired by Good Magic, who was beaten in the 2017 Champagne by Firenze Fire. He was a debut winner for Chad Brown at odds of 9-2 by more than six lengths after a stalking trip. In that race Blazing Sevens beat a horse who returned to win his next start and then ran in the Hopeful. Brown has three wins in the Champagne since 2016. Use underneath.

6. Gulfport (2-1 – Uncle Mo – Steve Asmussen / Joel Rosario – 4: 2-2-0 - $276,530) Gulfport was a heavy favorite in all four starts of his starts, having won as a first-timer at Churchill Downs in June as the 1-2 favorite by seven lengths. He came right back to win the Bashford Manor by more than 12 lengths. Gulfport moved to Saratoga with trainer Steve Asmussen, where he had a pair of second-place finishes in the Saratoga Special (G2) and then the Hopeful. He is another horse in this field who prefers to race on the lead. Experience edge.

Summary: Although the Champagne drew a small field of six, there is an interesting mix of 2-year-olds who have found success in stakes races already and others who have only an impressive maiden victory.

Andiamo a Firenze, Gulfport and Top Recruit are the stakes winners, and Top Recruit gets preference from that group. The regally bred Verifying has a chance to move ahead from his impressive maiden win at Saratoga for Brad Cox.

In a field where it is hard to eliminate any of them, Verifying is the top choice.