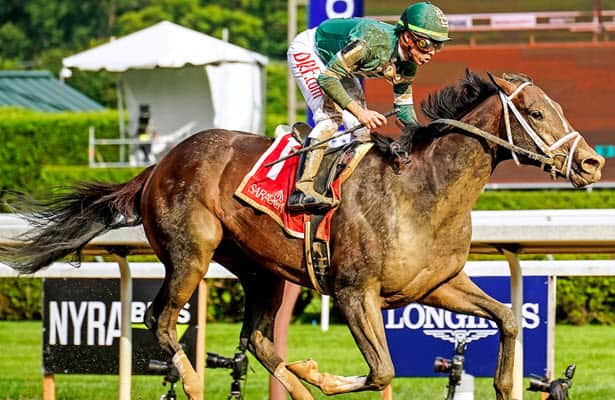 The Grade 1 Champagne has a lot to offer the six 2-year-olds that are entered to run the one-turn mile at Belmont Park on Saturday. Along with the $500,000 purse, the race is a win-and-you're-in qualifier for the $2 million Breeders’ Cup Juvenile, which will be run at Del Mar on Nov. 5. It also is the first prep race on New York’s road to the 2022 Kentucky Derby with qualifying points (10-4-2-1) given to the top four finishers.

Winners of the Champagne from the past decade or so form an impressive list of 2-year-olds that have had a significant impact on Thoroughbred racing, beginning with Uncle Mo in 2010 and moving forward with Union Rags, Shanghai Bobby, Daredevil, Practical Joke, Firenze Fire, Tiz the Law and, last year, Jackie’s Warrior.

Todd Pletcher, who already has won the Champagne six times, has a trio of 2-year-olds entered.

Here is a full field analysis for the Champagne with the official track morning-line odds. The Champagne is carded as race 8 of 11 with post time scheduled for 4:40 p.m. EDT.

1. Wit (2-1 – Practical Joke – Todd Pletcher / Irad Ortiz Jr. – 3: 2-1-0 - $192,000) Wit was a $575,000 yearling purchase and was sired by hot young stallion Practical Joke, who won the Champagne in 2016. Wit won his first two starts by a combined 14 lengths, both times rallying from behind after slow starts. In the Sanford (G3), he rallied from seventh to win by eight. Next in the Hopeful (G1), he stumbled badly at the start, was last in a field of 11, and might have left too much to do. He finished second behind Gunite, who got loose on the lead fairly early in the race. The extra distance to a mile will certainly help but still he needs to break alertly from the gate. Top choice.

2. My Prankster (5-2 – Into Mischief – Todd Pletcher / Luis Saez – 1: 1-0-0 - $55,000) The second of three runners for Todd Pletcher in this field, My Prankster crushed a field of nine by 10 lengths in his debut at Saratoga in August at odds of 3.50-1. He was a $600,000 yearling by Into Mischief. Mr. Prankster sat a stalking trip in his maiden victory, moved around the turn to be ahead by six at the stretch call, and widened the margin moving to the wire. That win earned a 92 Beyer Speed Figure, which is highest in the field. Win contender.

3. Jack Christopher (9-5 – Munnings – Chad Brown / Jose Ortiz – 1: 1-0-0 - $55,000) Jack Christopher was another impressive first-time starter, winning by almost nine lengths as the 1.10-1 favorite at Saratoga on Aug. 28. Trainer Chad Brown will try to win the Champagne for the third time. Jack Christopher was a relatively cheap purchase when he sold for $135,000 as a yearling. He earned a race-high 92 Beyer for his effort. He did not get to the lead immediately but, like My Prankster, had control of the race entering the stretch. Win contender.

4. Kavod (50-1 – Lea – James Chapman / Charles Roberts – 5: 1-1-0 - $94,500) Kavod will get blinkers again after wearing them in his first his first four starts. This $3,500 yearling purchase won his second start at Belmont Park in April and then ran second in the Tremont in a field of four. Trainer James Chapman specializes in having 2-year-olds ready to run in the spring. Kavod was fifth in the Sanford behind Wit and then tried the grass in the With Anticipation (G3) and was again fifth. Toss.

5. Gunite (4-1 – Gun Runner – Steve Asmussen / Ricardo Santana Jr. – 5: 2-2-1 - $292,988) Gunite will make his sixth start in the Champagne for Steve Asmussen, who won this race last year with Jackie’s Warrior. This Winchell Thoroughbreds home-bred needed three tries at Churchill Downs to break his maiden. Gunite then moved to Saratoga, where he was second in the Saratoga Special (G2). He was the upset winner of the Hopeful at odds of 11-1 when he got to the lead early and could not be caught at a time when Asmussen runners were winning many of the big races at the Spa. Win contender.

6. Commandperformance (10-1 – Union Rags – Todd Pletcher / Tyler Gaffalione – 1: 0-1-0 - $20,000) Commandperformance caught a muddy, sealed track in his debut at Saratoga for Todd Pletcher when he lunged at the start, got bumped twice, and found himself in last place in the early going. The $220,000 yearling purchase rallied to finish second and comes into this Grade 1 as a maiden. He will be the longest price of the three Pletcher runners and cannot be completely ignored. Live long shot.

Summary: The field of six in the Champagne is evenly divided with horses that ran a few times and those that made only one start. With 2-year-olds, experienced horses tend to have an edge, although these young horses can make a lot of progress in a period of a month or two between starts.

Wit and Gunite are both graded-stakes winners, with Gunite beating Wit in the Hopeful on Sept. 6 at Saratoga. On that day, Gunite got the better trip and could not be caught down the stretch. I look for Wit to turn the tables on Gunite in the battle of experienced horses.

My Prankster and Jack Christopher had similar trips, recorded open-length victories for top trainers in their debuts at Saratoga, and got identical speed figures. It is hard to separate these two, but Todd Pletcher has had tremendous success in the Champagne.