Chalon may race at age 6 after heading Belmont's Pumpkin Pie 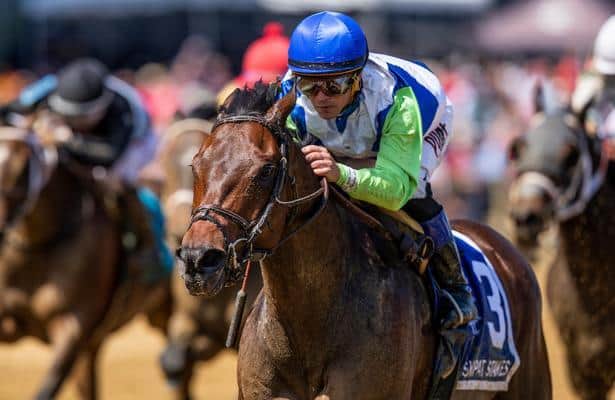 Five-time stakes heroine Chalon will take on seven fillies and mares on closing Sunday at Belmont Park in the $100,000 Pumpkin Pie going seven furlongs over the main track.

Owned by Roy and Gretchen Jackson's Lael Stables, Chalon was a close second to Shamrock Rose in last year's Breeders' Cup Filly & Mare Sprint at Churchill Downs and kicked off her 2019 campaign with a win in the Skipat on May 17 at Pimlico. She arrives at the Pumpkin Pie off of a fourth-place finish, beaten 3 ¼ lengths by Spiced Perfection, in the Grade 2 Thoroughbred Club of America on October 5 at Keeneland.

The 5-year-old bay daughter of Dialed In won her first stakes at Belmont when taking the Jersey Girl in June 2017 for former conditioner Peter Miller, for whom she was twice graded stakes-placed. She was then purchased for $550,000 at the Keeneland November Sale by Lael Stables and transferred to the care of trainer Arnaud Delacour.

Chalon has won four stakes since moving to Delacour's barn and was twice second at Belmont Park against graded stakes company. Should Chalon put up a good performance on Sunday, Delacour said she would likely remain in training at age 6.

"She's done well at Belmont. She ran second twice for me there, so I think that she likes the track. It's a good advantage for her," Delacour said. "She's been consistent this year. She was a little flat last time in the TCA and I'm not sure why. As long as she performs well, I think that the Jacksons will keep her in training and bring her back for next year."

Bred in Kentucky by J.K. Griggs and Linda Griggs, Chalon has amassed $878,895 in lifetime earnings.

Hall of Famer Javier Castellano, who has piloted Chalon in five starts, including last year's Filly and Mare Sprint, will be reunited with the mare on Sunday when she breaks from post 7.

Hillwood Stables and Richard L. Golden's Majestic Reason arrives at the Pumpkin Pie with a consistent record of 9: 4-3-2, including a stakes triumph against her Maryland-bred counterpart in the Miss Disco last August at Laurel Park.

Last out, the 4-year-old daughter of Majestic Warrior made her first start outside of her home state, where she was third beaten 5 ½ lengths to Come Dancing in the Grade 2 Gallant Bloom at Belmont Park.

Trainer Graham Motion said he is confident of a good performance from the consistent filly.

"You have to love a filly who goes out and runs all the time," Motion said. "She's never run out of the money. We stepped her up last time and it was a big jump. As a trainer, you admire a horse who always makes you look good and you don't have to worry about. You just know when you send her out there, they are going to perform at that level. You have to have a soft spot for a horse like that."

Motion said his biggest concern moving forward is stretching Majestic Reason back out to seven furlongs.

"She showed she wasn't too far behind those fillies [in the Gallant Bloom]," Motion said. "I love this filly. She's never done anything wrong. She's very consistent. I question a little bit the seven-eighths; her strength is three-quarters. But it seems like a logical spot. I worry if the track gets messy."

Maryland-based rider Jorge Vargas Jr. has been aboard Majestic Reason in eight of her nine career starts and will be reunited with the filly when she leaves from post 5.

Newtown Anner Stud and Mark D. Breen's Saguaro Row is still in search of a stakes victory but came close twice this year at Saratoga and Laurel Park, both in races named the Shine Again. The Michael Stidham-trained 4-year-old Union Rags bay was third in Laurel's Shine Again as the lukewarm favorite finishing a length to Our Super Freak.

"She's always been solid in her training in the mornings and the afternoon as well. We're looking forward to running her in this spot," Stidham said.

Saguaro Row was a dual allowance winner this season at Keeneland and Belmont Park, where she was piloted by Joel Rosario, who will be aboard once more on Sunday from post 8.

Trainer Jason Servis will saddle Jim Reichenberg and Cash is King's Ms Locust Point - a five-time stakes winner who captured the Grade 2 Barbara Fritchie in February 2018 at Laurel Park. The 5-year-old chestnut daughter of Dialed In seeks her first stakes triumph since winning Laurel Park's Primoneta on April 20. The nine-time winner of 20 starts has accumulated $675,975 in lifetime earnings.

The Pumpkin Pie is slated as Race 7 on Closing Day's 9-race card, which also features the Chelsey Flower in Race 4 and the Zagora in Race 8. First post is 12:20 p.m. Eastern.

These were the weekend's fastest stakes winners
Taiba proved that he's a runner to be reckoned wit...
x