Chad Brown returns to races, does not comment on arrest 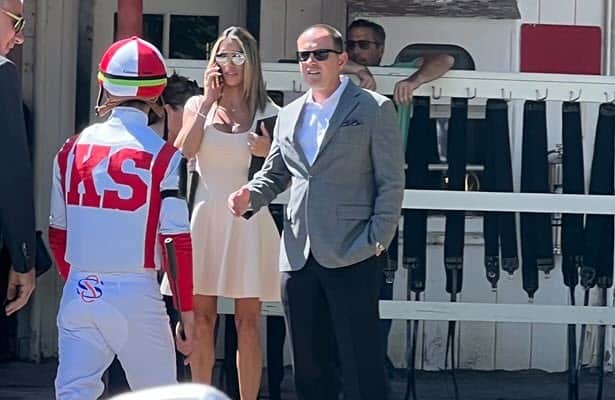 Trainer Chad Brown was back at the track Friday at Saratoga but would not comment when asked by reporters about the assault charge that landed him in jail on Thursday.

Brown was not in the paddock when his first starters on Friday's card,  Beachfront Bid and Gather The Facts, were being prepared for the second race. By the fourth race, Brown was on hand to oversee the saddling of 3-year-old maidens Transactional and Indemnify.

The pair of sophomores ran one-two as a coupled entry at odds-on for owner Klaravich Stables. Brown declined to speak with media after the race.

Accompanied by his girlfriend, who was not his accuser, Brown drove a golf cart to the main track in the morning for what appeared to be an otherwise routine morning of training horses. He was photographed later at his stable in barn 52 while holding what looked like two cups of coffee, wearing binoculars around his neck and speaking to visitors who appeared to be invited.

Brown was released on $2,500 cash bail Thursday after he pleaded not guilty to misdemeanor obstruction of breathing, according to police in Saratoga Springs, N.Y., and the district attorney in Saratoga County.

A four-time Eclipse Award winner who is the winningest trainer this summer at Saratoga, Brown was not seen publicly during Thursday’s races. His assistant Thomas Brandebourger saddled Brown’s two horses who finished out of the money late in the day.

Brown had seven horses entered at Saratoga on Friday and another two at Monmouth Park. He had another 16 drawn into races at the two tracks Saturday and Sunday plus one more at Parx Racing on Tuesday.

In the co-feature Skidmore Stakes for 2-year-olds at Saratoga Friday, Brown added another win with Oxymore. He spoke with reporters but did not address his arrest.

Brown also returned to Saratoga on Saturday for morning training.

The New York Racing Association had not taken any action against Brown, issuing a statement Thursday to at least two media outlets saying, “NYRA is aware of the charge brought against trainer Chad Brown today and will defer additional comment on this matter to the Saratoga Springs Police Department.”

According to what was read during an arraignment in City Court on Thursday, Brown was accused of pushing a woman down a staircase at his house in Saratoga Springs, pinning her to the floor and trying to choke her before throwing her out.

An Albany Times Union story said the police report filed with judge Francine Vero indicated the accuser had been a former girlfriend of Brown who repeatedly tried to reach the trainer Wednesday. The report said she used a key she had been given to get into the house around 11 p.m. EDT and found Brown in bed with a woman. The Times Union story said that was when the physical confrontation began.

Brown’s attorney Joseph Gerstenzang told Vero, “The wrong person was arrested here,” according to the Times Union. “It was a home invasion. She entered my client’s home. (She) in fact was the perpetrator.”

Vero said she did not believe the story, telling Gerstenzang, “The court is not in the business of blaming domestic-violence victims.” When Gerstenzang objected to the characterization, Vero corrected herself to say “alleged victim.”

At least one of Brown’s most high-profile clients was quoted as saying he would stand by the trainer.

“I think the thing with Chad is not true,” Peter Brant told BloodHorse. “I think there is something that we are not hearing, and I am totally supportive of him.”

Whether NYRA takes action against Brown may depend on whether it is as robust with him as it was with trainer Bob Baffert, who was suspended for one year ending Jan. 26 because of medication violations outside New York. Baffert never has been cited for any violation at a New York track.