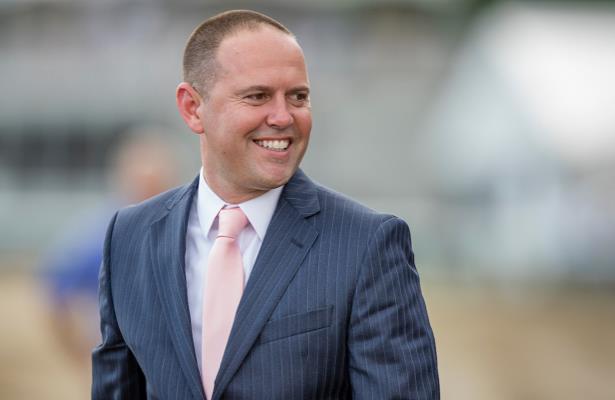 The quality of the 13 probable starters Chad Brown is preparing for the Breeders’ Cup World Championships would be the envy of almost any trainer in the world. Yet he finds some fault with it.

“We might have been just a tick deeper with our lineup the last few years,” Brown said.

The comment reflects just how powerful that lineup has been for the winner of four consecutive Eclipse Awards as North America’s leading trainer. His three Breeders’ Cup wins last year, hiking his rapidly rising total to 15, culminated in Bricks and Mortar’s taut victory in the Turf. Bricks and Mortar went on to emerge as the first Horse of the Year developed by the former understudy to late Hall of Famer Bobby Frankel.

If there is fault to be found with the talent Brown will be bringing to Keeneland Race Course for the season-ending championships Nov. 6 and 7, it is that the nation’s pre-eminent trainer on grass will be conspicuous by his absence from the 1 1/2-mile Turf.

“We don’t have a horse in that, which is disappointing,” Brown said of the $4 million Turf contest.

Rushing Fall, a winner of five graded stakes at Keeneland as part of a career marked by sustained excellence, is perfect in three starts this year. But she has not raced since winning the Diana (G1) on Aug. 23 at Saratoga Race Course. Sistercharlie is even more lightly raced with two starts. She finished third in the Diana in her most recent effort.

Uni looks to be formidable when she defends her title in the $2 million Mile after defeating males in that event last year. She, too, was limited to three starts this season. She rebounded from a dismal seventh-place finish in the Aug. 22 Fourstardave Handicap (G1) at Saratoga to win the Oct. 3 First Lady Stakes (G1) at Keeneland.

“Uni seems to be rounding back into form,” Brown said.

Uni will be joined by Raging Bull, Without Parole and Digital Age in the Mile. According to Brown, Digital Age “has never been doing better.”

Brown also looks to have a prime contender in the $1 million Dirt Mile in Complexity. He comes off a decisive victory against Code of Honor in the Oct. 3 Kelso Handicap (G2) at Belmont Park in only his third start this year.

“Hopefully, that is a sign that he’s coming into the best race for him,” Brown said.

Reinvestment Risk will take another crack at undefeated Jackie’s Warrior in the $2 million Juvenile after consecutive defeats. Brown hopes added distance and perhaps a different pace scenario can lead to a reversal of fortunes while acknowledging that the task is daunting. He said of Jackie’s Warrior: “He looks like an amazing horse.”

“It’s been a hell of a run and, hopefully, we can continue it,” Brown said. “When you get used to winning these races on an annual basis, anything less than winning on Breeders’ Cup weekend is a disappointment.”

Brown is keenly aware of the expectations he created. When asked if he feels pressure as the Breeders’ Cup nears, he responded, “I don’t know if ‘pressure’ is the word. But it’s true. We’ve raised the bar high. In 13 years training as a team, we’ve been able to win 15 Breeders’ Cup races, which is really a testament to the quality of the horses we’ve been given to work with and the talent of my team to bring them there.”