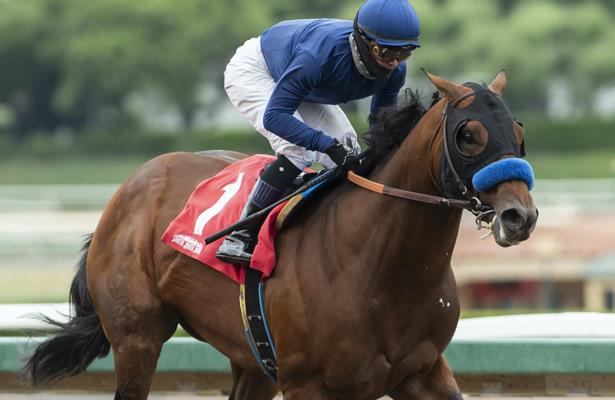 Cezanne, the 3-year-old Curlin colt trained by Bob Baffert and a $3.65 million purchase at auction, is entered for his second career start in an allowance optional claiming race at Los Alamitos Race Course on Thursday, July 2.

The first-out winner was installed as the 4-5 morning line favorite for Thursday’s fifth race at Los Alamitos, a $40,000 optional claiming race that drew five entries.

Cezanne also is nominated to the July 4 Grade 3 Los Alamitos Derby, a prep race on the "Road to the 2020 Kentucky Derby."

Purchased and owned by a group consisting of Michael Tabor, Michael B. Smith, Elias Stable and Mrs. John Magnier for $3,650,000 at the 2019 Fasig-Tipton Select 2-Year-Olds in Training sale, Cezanne won on debut at Santa Anita in a maiden special weight race on June 6.

Cezanne’s debut win at Santa Anita was at 6 1/2 furlongs on the main track. His victory earned the ownership group $30,000.

Having won two of his 11 career starts, the Andrew Lerner-trained gelding has earned $84,229 in his career.

Flavien Prat will get the call for Baffert on Cezanne, while Drayden Van Dyke will be in the irons aboard Bonn.

*Rating is based on HRN fan votes, which rank the Top Active Horses in training.
Cezanne Los Alamitos Race Course