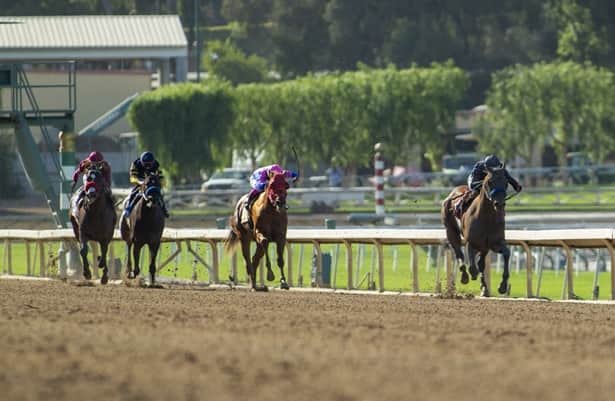 Purchased for a whopping $3,650,000 at age 2 and idle since Aug. 1, Bob Baffert’s Cezanne came back to the races in a massive way in Sunday's Grade 3 Kona Gold at Santa Anita, as he rallied into a blistering pace and came away with a 9 3/4 length victory over odds-on favorite Brickyard Ride.

With leading man Flavien Prat picking up his fourth win on the day and his second stakes score, Cezanne, a 4-year-old colt by Curlin, smoked home in 1:14.71 for 6 1/2 furlongs.

Taken in-hand out of the gate while stablemate Ax Man chased Brickyard Ride, Cezanne was next to last in a field of four at the rail and moved into contention around the far turn while well within himself. With Prat sitting motionless to the 5/16 pole, Cezanne fairly sailed by Brickyard Ride turning for home and won in sensational fashion as Baffert picked up his second win on the day.

“It worked out well,” said Prat, who has ridden Cezanne in all four of his starts, winning three times. “We had a fast pace in front of us, and we were able to save ground. He gave me a good kick when I asked him. He ran really nice.”

Fourth in the two-turn Shared Belief Stakes at Del Mar Aug. 1, Cezanne, in his second career stakes assignment, was the second choice at 9-5 and paid $5.80 and $2.40 with no show wagering.

“We knew there was going to be a hot pace,” said Jimmy Barnes, assistant to Baffert, who also collected his fourth Kona Gold win today. “Not sure how fast, but it ended up being fast, and you know Cezanne just ate them up. (Prat) gave him a wonderful ride and Bob had him ready. …With the races coming up this spring and summer, we should be looking really good with Cezanne.”

Owned by Mrs. John Magnier, Michael B. Tabor, Derrick Smith and St. Elias Stable, Cezanne, who is out of the Bernardini mare Achieving, Cezanne now has three wins from four starts and, with the winner’s take of $60,000, increased his earnings to $123,000.

Brickyard Ride, who set similarly fast splits in winning the seven-furlong San Carlos Stakes (G2) at Santa Anita on March 6, was unable to notch his third consecutive stakes win but stayed gamely for the place, finishing 1 1/4 lengths better than Fight On, while Ax Man checked in last.