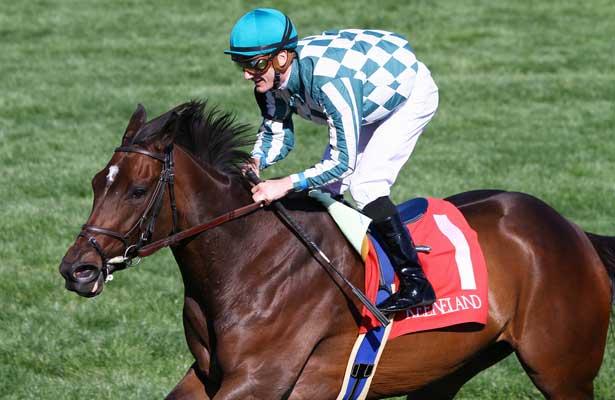 G. Watts Humphrey Jr.’s Centre Court overhauled defending champion Daisy Devine at the sixteenth pole and drew off to win the 25th running of the $300,000 Jenny Wiley Stakes (G1) for fillies and mares by two lengths on Saturday afternoon at Keeneland.

Trained by Rusty Arnold and ridden by Julien Leparoux, Centre Court is a four-year-old Kentucky-bred daughter of Smart Strike out of the A.P. Indy mare Let who covered the 1 1/16 miles on a firm turf course in 1:41.73.

Daisy Devine, seeking to become only the second horse to win consecutive runnings of the Jenny Wiley, led the field past the finish line the first time and opened a daylight lead under James Graham with fractions of :23.99, :48.08 and 1:12.18. Leparoux had Centre Court in third place until moving past Quiet Oasis (IRE) turning for home.

It was Leparoux’s second Jenny Wiley victory to go with Forever Together in 2009.

Centre Court, winner of the Honey Fox (G2) and Mrs. Revere Stakes (G2) in her past two starts, gradually cut into Daisy Devine’s lead and rushed past at the sixteenth pole for her first victory at Keeneland.

The victory was worth $180,000 and increased Centre Court’s earnings to $746,012 with a record of 11-6-4-0 that includes five graded stakes victories and first Grade 1. Centre Court never has been worse than second in 10 starts on grass.

Better Lucky was 2½ lengths back in fourth and was followed in order by Ausus, Abaco, Old Tune (BRZ), Quiet Oasis and Hard Not to Like.