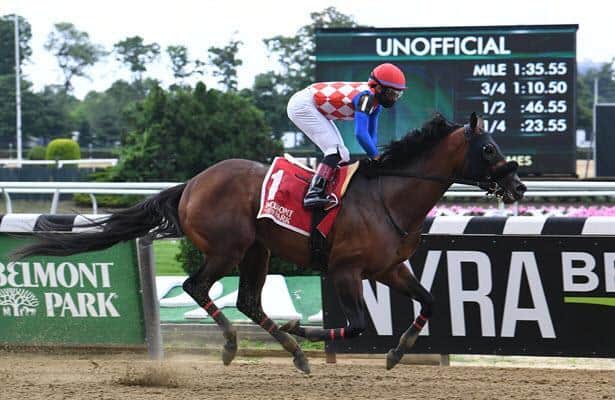 Trainer Ray Handal said Imperial Racing's Celtic Striker will shoot for a first graded-stakes win in the Grade 3, $100,000 Peter Pan, a nine-furlong test slated for July 16 on Opening Day of the Saratoga meet.

The Congrats bay, bred in Kentucky by Stoneview Farm and Craig D. Upham, was an emphatic 19 3/4-length winner last out in the 1 1/16-mile Easy Goer, which was reduced via scratches to a match race with Sonneman.

The colt breezed three-eighths in 39.95 seconds over Belmont Park's Big Sandy on July 9 in his first breeze back, and Handal said Celtic Striker is in good order.

"I just wanted him to stretch his legs. I wasn't worried about time, I just wanted him to open his lungs up," said Handal. "We galloped him around like normal and then let him open his stride up from the half-mile pole to the wire. It's all we wanted to do as he's coming back on three week's rest to run in the Peter Pan.

"Normally, I wouldn't have breezed him but because we're going from a one-turn to a two-turn, I wanted to make sure I had his endurance up."

A winner at second asking in October traveling six furlongs on a sloppy main track at Monmouth Park, Celtic Striker made his New York debut with a stalking fourth in the Jerome on New Year's Day at Aqueduct.

The well-traveled horse then shipped to Parx and added blinkers for an optional-claiming win in February before off-the-board efforts in the Gotham (G3) at Aqueduct in March and the Matt Winn (G3) at Churchill Downs in May.

"He's a real easy horse to travel, and it's why I've been flexible with his schedule. He's a really chill dude," said Handal. "Anywhere you take him, he goes around like he's been there his whole life. It's why I put blinkers on him, he's almost too chill. The light bulb is starting to come on. I galloped him after he won the Easy Goer, and it was the first time he really pulled me around there without the blinkers on."

Handal said he may reduce the blinkers for Celtic Striker over time.

"I might cut them back," said Handal. "He was so easy for Manny [Franco] in that last race even though he did have the French Cup blinks on, but I could see cutting them down to a cheater."

Handal has won three races at the 25-day Belmont spring/summer meet, including two in stakes races.

On July 3, VinLaur Racing Stables, Dark Horse Racing Stable and Taste Of Victory Stables' I'llhandalthecash dug in for a game half-length score in the License Fee at six furlongs on Belmont's inner turf.

A three-time winner, I'llhandalthecash graduated at second asking on the Belmont turf in May 2019 and added her second score with a pressing effort in a Saratoga turf allowance sprint in September.

She entered the License Fee off a pair of difficult trips when steadied and bumped in the Captiva Island in March at Gulfstream and an optional-claiming turf sprint in May at Churchill Downs.

Handal said I'llhandalthecash is the type of filly that doesn't back down from a fight.

"She came out of the win great. She's a big, tough filly. She's like a colt," said Handal. "She's been like that since we bought her at the sale, she's like Ronda Rousey and wants to kick your ... . And that's why after the Churchill race, if there was anyone that would bounce back from something like that, it would be her. She just loves to run."

"The tentative plan is to run back in the Caress at Saratoga," said Handal. "It's a touch quick back but it's a cut back in distance, and I'd have more reservations if it was going further."

Perrine Time Thoroughbreds' Kansas Kis, a game second in the Busher Invitational in March at the Big A, is enjoying some down time at the farm ahead of a fall campaign.

The sophomore daughter of Constitution, who debuted in August at Saratoga and graduated in January at Aqueduct, boasts a record of 9-1-3-2 with purse earnings of $146,499. She was an even fourth last out in a 1 1/16-mile allowance contested June 11 on a muddy Belmont strip.

"She's getting 60 days at the farm. She was in training for over a year and had a lot of miles," said Handal. "I thought she ran well in the allowance the other day but just didn't have that kick at the end like she had before. Even though she was in tight, I thought she had enough of a shot if she had enough horse to pop through and win that day. She'll have a presence in the fall and winter here."

Bush Racing Stable's Timely Tradition, a New York-bred daughter of First Defence, is in the midst of a three-race win streak. Handal claimed the 6-year-old mare for $25,000 in January at Aqueduct and she returned to win a restricted claiming event in March at Aqueduct by 3 1/4 lengths while garnering a career-best 86 Beyer Speed Figure.

Handal sent Timely Tradition to Oaklawn Park in May where she captured an open allowance sprint and she returned to the Empire State to complete the hat trick with a 1 3/4-length score in a restricted optional-claiming tilt on June 27 at Belmont Park.

Handal said patience and space between races has been key for Timely Tradition's run of form.

"She's a filly that puts a lot into her races," said Handal. "She drops off and gets skinny, so right now I'm focused on filling the tank up. She's been getting turned out in my round pen here and eating lots of grass for the last two weeks. I'll ship her up to Saratoga this weekend."

With a record of 28-10-5-4 and purse earnings of $342,247, Handal said he will continue the patient approach as he looks to find a winning spot at the Spa for Timely Tradition.

"She's been super. I haven't done anything to reinvent the wheel, I've just babied her," said Handal. "I'll take her to the pony track to train and only take her to the main track to breeze her. We'll find a spot for her upstate."